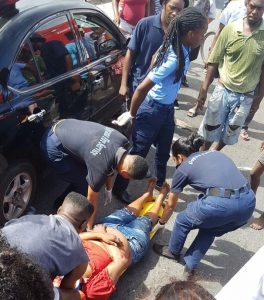 A motorcyclist Sunday afternoon sustained serious head injuries after she was struck down by a car driven by a uniformed policeman who was driving under the influence of alcohol.

A Guyana Police Force officer told Demerara Waves Online News that Constable, Nigel Griffith, of Brickdam Impact Base was driving under the influence of alcohol. “He was way above the prescribed limit,” the officer said.

Police said Griffith was proceeding north on the Ruimveldt Public Road when the rider of the motorcycle rode out of Alexander Village into his path. 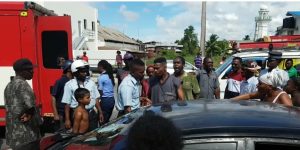 First responders attached to the Guyana Fire Service rushed the woman to the Georgetown Public Hospital in an ambulance for emergency treatment.

The incident, which occurred near the Ruimveldt Police Station, involved a  heavily tinted black car bearing license number PSS 4303 and a scooter. Police said the car is privately-owned and all its documents “are expired”.

Police said the constable is in “custody assisting with the investigation.”