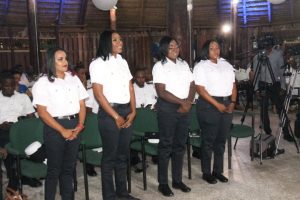 Guyana for the first time has female ship captains who are responsible for all operational aspects of ships at sea or in port, as the country seeks to address an “acute shortage” of qualified persons to man vessels.

They were among 16 Marine Cadets who graduated from a Maritime Administration (MARAD)-organised course that began in 2012.

“It is the first time in the history of Guyana that a Guyana-flagged ship has certified women who can take and have been taking command at the helm,” MARAD Director-General, Claudette Rogers said at the graduation of the cadets held at Umana Yana, Georgetown.

She hailed Sabita Sukhdeo, Sheryl Wilson, Vanessa Merchant and Abiola Hinckson as trailblazers who have “changed the landscape being the first females in Guyana to have successfully completed all three tiers of the Boat Masters training”.  Rogers announced plans by MARAD to train female ship engineers. 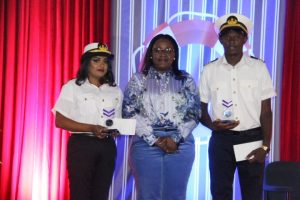 One of the female captains said she and her female colleagues’ successful completion of the training of the Marine Cadet training programme should be an example for other women to follow. “We have carried with us the unwavering banner that anything that is worth achieving is worth working for and it is because of this, we have challenged every stereotype and shattered that glass ceiling in a typically male-dominated realm. Ladies and gentlemen, we see ourselves as trailblazers and we are hopeful that young women take up the mantle after us.”

The overall best graduating student, Keon Hestick, will be going on an internship in Miami, Florida courtesy the Global Maritime Consulting Group. In his speech, Hestick said he seized the opportunity to pursue the programme because he had long harboured a “craving curiosity” about vessels and their operation. “The journey, however, was not simply A-B-C because there were times when we felt like quitting but we weathered the storms because, like my colleague said, winners never quit and quitters never win,” he said.

Former Minister of Public Works, Robeson Benn, who was present at the graduation, was credited with resuscitating the Boat Masters training and initiated the Marine Cadet training programme five years ago. 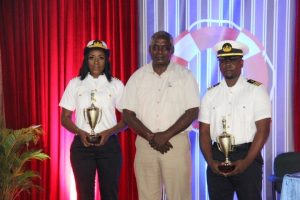 Classes were held at the Ports and Harbours Division of MARAD and at MATPAL Marine Institute, while practical sessions were conducted aboard Transport and Harbours Department vessels and privately-owned vessels as well as 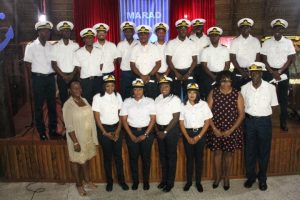 MARAD’s dredge, Steve N, and pilot launches as well as small commercial and coastal-going vessels. Ports were also inspected and safety inspections were conducted in collaboration with the Guyana Defence Force Coast Guard and the Guyana Police Force.

Tennant called on the graduates to execute their duties professionally. “Cadets, as you journey in this profession, make every effort to be innovative. Maintain your focus and strive for the sky. It is the limit. The time that you have long waited for is now. The opportunities are yours so make full use of them,” he said.