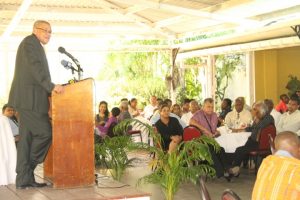 Commissioner-General of the Guyana Revenue Authority (GRA), Godfrey Statia warned Guyanese businessmen against offshore tax evasion, saying that global systems are being increasingly networked to weed out tax cheats and report them to their home-countries.

Addressing a luncheon organised by the Guyana Manufacturing and Services Association (GMSA) at the Georgetown Club, he said Guyana could access tax information in keeping with the Inter-Governmental Agreement governing the United States  Foreign Account Tax Compliance Act (FATCA), this country’s membership of the Global Forum for Exchange of Information and the implementation of the United Nations Conference on Trade and Development’s (UNCTAD) Automated System for Customs Data (ASYCUDA),  and “many loopholes will be closed or minimised.”

“I would like to take this opportunity to advise Guyanese businesses to be au fait with these new developments when making business decisions and tax planning. The world has changed and we should change with it or we shall be penalised,” said Statia.

ASYCUDA is an integrated customs management system for international trade and transport operations in a modern automated environment.

Noting that offshore tax evasion is a serious global problem, the GRA Commissioner-General said tax administrations have been working together to ensure taxpayers pay the right amount of tax to the correct jurisdiction. “Tax Avoidance schemes, transfer pricing, over/under invoicing, related party transactions and beneficial ownership schemes (just to mention a few) previously practiced with impunity are now scrutinized and the information shared,” he added.

Meanwhile, the GRA boss restated that an agreement has been signed with UNCTAD for the implementation of the ASYCUDA system aimed at modernising customs operations and improving revenue collection, facilitating trade efficiency and competitiveness by substantially reducing transaction time and costs,  improving security by streamlining procedures of cargo control, transit of goods and clearance of goods and reducing corruption by enhancing the transparency of transactions.

The system, he said, would also promote sustainable development by cutting down on the use of paper, through the use of electronic transactions and documents.

Statia said UNCTAD has been already paid for the new system, GRA has already chosen a team and training would begin soon to pave the way for a pilot project at the John Fernandes wharf.