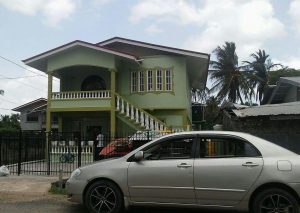 The house where Fenton Belle lives.

Police in Berbice are hunting for a lone gunman who opened fire on a 45-year-old farmer Wednesday evening as he was entering his yard at Islington, New Amsterdam.

In a press release, the Guyana Police Force stated that multiple shots were fired aiming at the man’s neck moments after he had finished conversing with a police officer.
The injured farmer, Fenton Belle, disclosed that the alleged shooter was hiding behind a concrete wall in the nearby ball field and fired in his direction as he turned to close his gate.
“Me friend reverse out and like after he turn out the street and I turn fah lock the gate, I just start hear gunshots”.
Belle stated that immediately after being grazed to the neck by a bullet, he laid flat on the ground, while the gunman continued to fire shots aiming at his house. He was unable to see the identity of the shooter.
After waiting several minutes, to ensure that calm had returned, he entered his home and immediately contacted the police who arrived minutes later.
The man is baffled about who would want him dead while noting that he has no grievances with anyone and strives to earn an honest living.
Meanwhile, police sources confirmed that several spent shells were recovered from the scene. Investigations are ongoing.