Updated: Body of raped 13-year old boy found in river is badly decomposed; suspects to be charged with murder 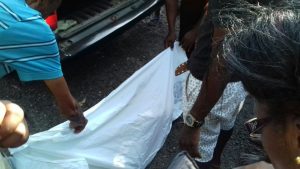 The decomposed remains of 13-year old Leonard Archibald being removed from near the location where it was discovered.

The decomposed body of the 13-year old  boy, who was raped and dumped in an unconscious state in the Berbice River six days after he went missing , was Saturday afternoon retrieved from the watery grave, police said.

Demerara Waves Online News observed that the body of Leonard Archibald was ‘tied like an iguana’ – his hands and feet were tied behind his back. 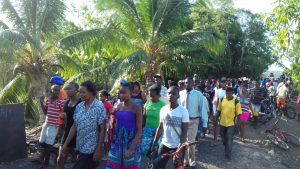 Residents of West Bank Berbice who turned out to witness the retrieval of the body of Leonard Archibald.

After seeing the remains of her son, his mother remarked that she felt at peace that his body was found. Residents at the scene screamed for justice to be served.

Head of the Criminal Investigations Department said the body was identified by its face and the clothing. 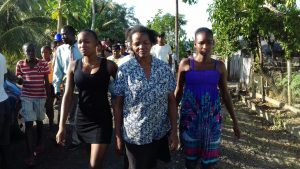 Leonard Archibald’s mother (centre) leaves the scene after seeing the decomposed body of her son.

Berbice Divisional Commander, Assistant Commissioner Lyndon Alves said the body of Leonard Archibald was discovered on a mudflat at Korthberaadt further down the Berbice River from Sister’s Village where the body was dumped.

Police said the body was found  at about 3 PM, about three miles from Brothers Village,East Bank Berbice where the boy lived.

Alves said based on the confession by one of the detainees and information provided by the other one, both are expected to be charged early next week with the offence of murder. He said the second person has tied himself into the offence based on the information he provided to investigators.

The lad disappeared last week Sunday while he and his sisters were returning to their home at Brother’s Village, East Bank Berbice from a birthday party.

On Friday, the suspects led sleuths to the area where the boy was throw into the river. His bicycle was located nearby.

Since then, police, Coast Guardsmen, residents and relatives had launched a search for the body of the lad whose grieving mother remembers as  a very helpful and willing son.

2017-09-23
Denis Chabrol
Previous: Prime suspect in rape of 13-year old missing boy has checkered past
Next: Missing 13-year old boy: “We find he body tangle up between some vines”