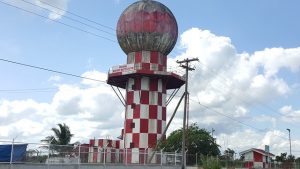 Guyanese  are expected to receive more accurate, timely weather reports from the Hydro-meteorological Services Department of the Ministry of Agriculture as it has now been boosted with 21 Automatic Weather Stations (AWSs) to enhance its existing framework.

These weather stations, together with site preparation and installation costs totaling US$257,000 were donated under the United States Agency for International Development (USAID) Climate Change Adaptation Programme (CCAP) and the project was facilitated by the Caribbean Community Climate Change Centre (CCCCC).

The US$26 million USAID CCAP is designed to strengthen an integrated system for the implementation and financing of sustainable adaptation approaches in the Eastern and Southern Caribbean region. This initiative builds on both the USAID/ ESC’s Caribbean Regional Development Cooperative Strategy and the CARICOM Regional Framework for Achieving Development Resilient to a Changing Climate.

In keeping with the investments planned under the programme, one such activity is the provision of the AWSs to enhance the existing network within Guyana and the wider region. Under a CCCCC commissioner study conducted by the Caribbean Institute of Meteorology and Hydrology (CIMH) in early 2017, Guyana became the beneficiary of the weather stations. The total cost of the stations is US$215,000, with site preparation and installation costs amounting to approximately US$42, 000, a total investment of US$257,000.

They will serve to enhance the national and regional network of climatological observation and early warning stations that would provide optimal coverage to address the meteorological and hydrological needs within Guyana and the sub region. The prime objective is to contribute towards the provision of new climate information and institutional governance to help support the needs and requirements for the many critical sectors in Guyana such as agriculture, mangrove areas, water resources management and others.

Ms. Maxine Nestor, Procurement Officer of the CCCCC, said those weather stations would see greater benefits for the country, particularly for fisher folk, farmers and other persons who are dependent on accurate weather information.

“Farmers, for example, would like simple questions to be answered; more so in the face of a changing climate regime and with many unable to invest in risk transfer mechanisms such as crop insurance. These questions include, when should I farm? What is the expected duration of the wet/ dry season? When should I reap before the rainy season comes?  With better spatial coverage, some of these questions can be answered, reducing losses, securing livelihoods and improving the quality of life of many small-scale farmers, among other stakeholders,” Nestor was quoted as saying in a Ministry of the Presidency statement.