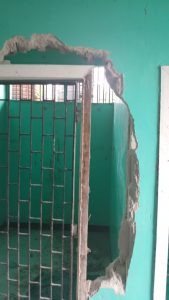 A section of a wall at the National Pyschiatric Hospital broken by violent patients.

Nurses at the National Psychiatric Hospital Tuesday staged a three-hour sit-in over the dangerous conditions they are facing at that mental health facility where several patients violently broke two walls late Monday night.

When this publication visited the health institution at Canje, Berbice, the Hospital Administrator, Luanne Sulker, said she was not permitted to speak to the media about the industrial action.

However, Demerara Waves Online News received information that late Monday night four patients broke a wooden wall Monday night  and used the wood to break a concrete wall and exit the building. Police reportedly quelled the situation early Tuesday morning. One of the patients was said to be a prisoner who was reportedly transferred from Georgetown the previous week.

It was reported that when the lone nurse on duty attempted to subdue the patient, he picked up a piece of wood and chased a male nurse. He was not injured.

Guyana Public Service Union (GPSU) representative in Region Six, Ram Mangru confirmed that the nurses at the National Psychiatric Hospital staged a sit-in for a short while on Tuesday to gain the attention of top regional officials about their plight. He said a decision was taken to provide more guards, install lights and ask police  to monitor the health institution.”The workers are dissatisfied with the quality of security service being provided,” Mangru told Demerara Waves Online News from his home at Port Mourant, Corentyne.

The nurses had met their wits ends with the endless issues and refused to attend to the patients until there was a “beef up in security” and improvement of the conditions. 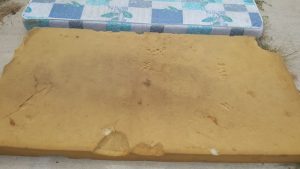 Beds at the National Psychiatric Hospital

This was just the start of the disturbing reports received. Information disclosed by a credible source revealed that the National Psychiatric Hospital is in chaos and nurses are putting their lives at stake on a daily basis with nothing being done to improve the safety conditions.

There were reports received that the Hospital is lacking the critical drugs needed to treat the patients for months. It was reported that there is a shortage of beds at the hospital, forcing patients to sleep on thin mattresses on the concrete floor. Also, sources disclosed that a patient was removed from the very single room and was allegedly raped by an intruder last week.

Although these were reported to the management, nothing was done until the nurses decided that they would strike.

Demerara Waves Online News understands that the nurses were briefed by the Regional Executive Officer, Ms. Kim Williams-Stephens who promised to immediately put systems in place to rectify the issue.

Meanwhile, Regional Chairman, Mr. David Armagon told this publication that security at the Hospital remains an important issue. He stated that the hospital only boasts three guards; two at the front gate and another inside. They were reportedly unable to assist the nurse that was assaulted in fear that they too would be seriously injured. Armagon posited that the number of guards available in the region is inadequate to address security concerns and there is a need for the Psychiatric Hospital to have their ‘own security team’.

“We need set systems in place and try to get a major company to provide security to the hospital. I understand that the guards stationed there are not capable of dealing with such situations. They are elderly security guards. So something needs to be done before the situation gets out of hand and nurses refuse to seek employment there”.

In December of last year, an employee of the health institution was stabbed to death because of a lapse in security. The Health Director, Mr. Jevaughn Stephens had told reporters that security at the hospital would have been increased but to date, nothing was done.

When the director was contacted for a comment on this latest incident, he too declined to speak, only stating that the Minister of Health, Volda Lawrence and the Regional Executive Officer were handling the situation”.