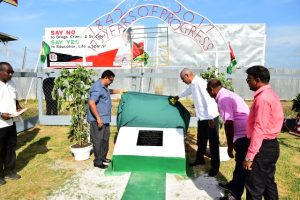 President David Granger has urged youths of Region Six (East Berbice-Corentyne) to lead the way in creating jobs for themselves and called on all stakeholders to make Rose Hall Town the commercial hub of that agriculture-dependent region.

“From time to time when I visit this region, I am always asked about the creation of jobs for our youths and this should not be so. You have a town here rich with opportunity for our youths and that is why I urge you to tap into your potential and help to make Rose Hall into the commercial hub for East Berbice Corentyne” he said in a main address last Thursday to mark the town’s 175th anniversary.

The Granger-led coalition, in the lead-up to the 2015 general elections had promised to create jobs for youths, and since coming to office has assured that it would create the right conditions to facilitate job creation.

In the area of business and commerce, the President called on all stakeholders to work together to make Rose Hall the commercial hub of Region Six and create thousands of jobs. “Now that we have a consolidation of the sugar industry, let us look to see ways and means of creating new industries…the door is open to micro-financing and agro-processing,” he said. 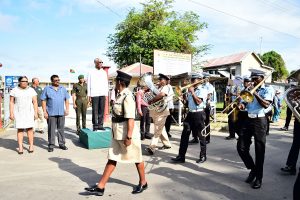 President David Granger takes the salute at a march past at Rose Hall Town at the commencement of an event to mark that municipality’s 175th anniversary.

Government in May 2017 formally announced in a white paper tabled in the National Assembly that in addition to the already closed Wales Estate, West Bank Demerara; the Skeldon Sugar Factory and Estate in Corentyne would be sold, and the Rose Hall and Enmore factories would be closed by year-end.

The Albion, Rose Hall and Blairmont operations in Berbice and the Wales-Uitvlugt operations in West Demerara would be combined to together produce 147,000 tonnes of sugar annually. The opposition People’s Progressive Party (PPP) and its aligned Guyana Agricultural and General Workers Union continue to oppose closure or privatisation of sections of the state-owned sugar industry, arguing that thousands of jobs will be lost.

At the activity hosted by the Rose Hall Town Youth and Sports Club (MS), which kicked off with a grand march past by the Joint Services, schools in the Rose Hall Town area and members of the ‘Police Mounted Branch’, the  President highlighted that with the amount of ‘financial houses’ being established, Rose Hall can soon become the economic center of the region. “This is one of the most productive regions in the country and with the right vision you have the potential to lead a commercial revolution”.

At  Area ‘H’ Ground the 175th Anniversary Monument was unveiled, and the Patron’s 72nd Birthday Scoreboard was commissioned. 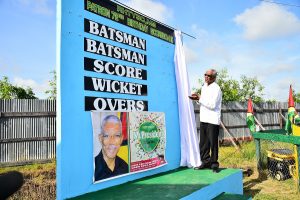 The Head of State touching on the history of the town stated that without of the sacrifice made by the fifty-seven founders 175 years ago, the small town of Rose Hall would not have been where it is today. He noted that with the guide of the four pillars used by their fore-parents: ‘the school, the church, the farm and the home’, they can upkeep the vision of their founding leaders and push the town further into greatness.

“Rose Hall is a small town with a big heart and it is up to you to uphold the name and standards set by your fore parents when they purchased this land and transformed it into something worthy of a name”.

Further on, the president reiterated the need for education and highlighted that although small, Rose Hall boasts a large number of educational institutions and has evolved into a ‘significant education center’.

“Education is very important. Without education, there will be no economic progress so it is up to you residents of Rose Hall to ensure that the many schools in the town are maintained and to ensure that every child has access to their education”.

Meanwhile, Regional Chairman Mr. David Armagon in his short address spoke of the many infrastructural improvements made in the town namely the installment of a pump system to aid in the reduction of flooding. Armagon then encouraged the residents to continue to improvements as the town has a ‘far way to go’.

The anniversary activities commenced on August 19th with a interfaith service and will continue until September 20th with other activities such as a fitness walk, health and career fairs and a variety of sporting competitions.

As part of the activity, the club also awarded four pioneer women with tokens for their services over the years. They are Ms. Gainwattie Budhoo, Ms. Bibi Mohammed, Ms. Esther Frazer and Ms. Bernadine Meyers.

Rose Hall was once owned by Dutch planters and later purchased by field slaves. In 1908, it acquired village status; and it wasn’t until 1970 that it became a town. Rose Hall has an area of 13 km² and a population of about 15,000.