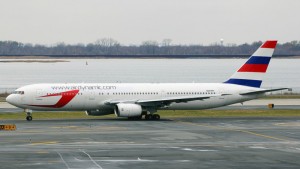 Dynamic International Airways is about to drastically cut its number of flights to Guyana, officials said.

Gerry Gouveia, Chief Executive Officer of Roraima Airways- Dynamic’s local handler, told Demerara Waves Online that he was “seeing two flights in the system” and the carrier would be “consolidating” already booked passengers to fly them on the reduced schedule.

The Winston-Salem Journal reported Monday that Dynamic International Airways is planning to reduce its service to Guyana from five flights weekly to just one beginning in early October. Gouveia hopes that Tuesday’s meeting would inform that the cutback in flights would be for the “low season” that ends in November.

He said the original plan was to slash the number of flights from five weekly to thrice weekly and resume at seven flights weekly.

He said after a key meeting is held Monday he would be able to say definitively what decision has been taken. But, already he said the reduction in flights would result in Caribbean Airlines, the major carrier on the Guyana-United States route, doubling its fares. “It’s not easy. It’s going to be terrible because what it means is that the travelling public will be left to the mercies of the monopolies and you will see  how ticket prices will go to fifteen, sixteen, eighteen hundred dollars especially going into the Christmas season,” he said.

The other  carriers on the US-Guyana route are Fly Jamaica, Suriname Airways and Caribbean Airlines.

The airline has cut 60 of 192 jobs since filing for Chapter 11 bankruptcy protection July 19. It has plans to add eight pilots and 22 flight attendants as part of expanding services through a new flight strategy that began Friday. Dynamic reported trimming its customer liability debt from $7.98 million to $1.96 million as of Friday. It projects reducing the debt to $323,659 by mid-October.

Dynamic said its focus will be on an aircraft, crew, maintenance and insurance strategy, known as ACMI, in which it gains business from a third-party vendor that sells flight tickets.

An ACMI carrier receives a flat rate per flight hour. Dynamic said it has agreed to one ACMI contract with Swift Travel Services for flights between Port Au Prince, Haiti, and Santiago, Chile. It is negotiating for a second such contract for flights from Miami to Havana and Santa Clara, Cuba.