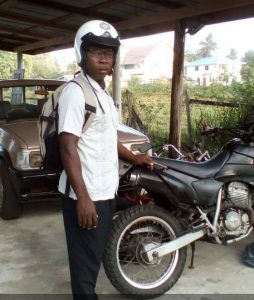 A Guyana Police Force mechanic, who  took a motorcycle on a test-ride but did not wear a helmet, died in a road accident not far from his home village of Mahaicony, East Coast Demerara.

He has been identified as 37-year old Constable 24376 Elroy Newton of 70 Voorzig, Mahaicony.  Police said he left the Transport Workshop, Eve Leary at about 3PM and was returning to Georgetown when he lost control of the Force’s motorcycle, CE 4555 at about 7:30 PM.

“About 19:30 horus,whilst proceeding north along the Unity Old Road allegedly at a fast rate and without wearing a safety helmet, the Constable in the process of negotiating a sharp turn ,lost control , fell onto the road surface and sustained injuries.He was rushed to the Mahaicony Cottage Hospital where he was pronounced dead on arrival,” the Guyana Police Force said.

He was married and the father of one.