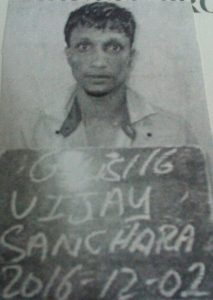 A convict, who went “missing” from the Mazaruni Prison, was arrested Thursday several miles from that maximum security jail and has since given several reasons for his departure from the stock-farm at the penitentiary, Director of Prisons, Gladwin Samuels said.

He said 31-year old Vijay Sanchara of Maria’s Pleasure, Wakenaam was recaptured more than 12 miles from the prison at Goat Creek at about 5:15 PM.

Samuels said the inmate has since given several versions about how he left the group of other prisoners while they were on the stock-farm on Wednesday.

Those include being unable to make contact with his mother, Zoreina Sanchara, he went to use the toilet and that he would die in jail during his seven-year period of imprisonment for wounding with intent.

Sanchara  was discovered missing until the other inmates had returned to the prison and a roll-call was conducted.

He was among a group of prisoners who had been transferred from the Lusignan Prison following the massive unrest dating back to July, 2017 when the Georgetown Prison was burnt down.