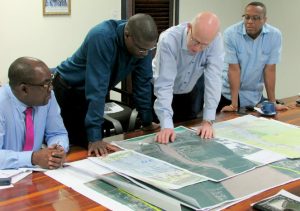 Minister of Public Infrastructure, David Patterson on Thursday refused to disclose the amount of money needed for key aspects of the new Demerara Harbour Bridge project but slammed as a “big fat lie” Opposition Leader, Bharrat Jagdeo’s claim that next to the existing Demerara Harbour Bridge was the best location for a new river crossing.

Patterson said proposals have been submitted to Finance Minister, David Patterson for the construction of associated roads and the compulsory acquisition of 20 metres of land belonging to Muneshwer’s shore-base at Houston as well as the optional relocation of two or three houses and a nursery school mainly because of vehicular noise nuisance.

Patterson said Pritipaul Singh Investments, Gafoors Hardware Store and Toolsie Persaud would not be affected by the new bridge.

The Minister said just as government has been subsidizing the cost of crossing the Berbice River through water-taxis and bridge tolls, the administration was ready to provide similar financial support to cushion likely increased tolls for crossing the new Demerara River Bridge.

“Honourable member Jagdeo, if the Demerara River Bridge crossing financial works out that we have to give an equal subsidy to the residents of Region Four, Region Three and all the users of that bridge, so be it. That is our responsibility and if that is not transparent you have an opportunity this year to vote against it,” Patterson said, adding that he would most likely call for vote in the House to clearly show the voting by the opposition parliamentarians.

The Feasibility Study and Design for the new Demerara River Crossing- public stakeholder consultations” by LienvenseCSO Consultants states, among other things, that “there seems to be room for both toll tariffs to be increased but affordable toll will never cover for debt service>>> government support is required.”

Patterson further informed that contrary to Jagdeo’s utterances on Wednesday, available documents such as studies and a Cabinet memo, show that the People’s Progressive Party Civic-led administration had also preferred the Houston-Versailles link. The Public Infrastructure Minister said a pre-feasibility study done in October 2013 by the Central Transportation Unit’s Engineer, R. Charles showed a “high-level four-lane fixed bridge at Houston-Versailles is the only economical feasible alternative providing benefits to society that can amount to minimum of some 223 million dollars over a seven-year cycle at a capital cost around 264.5 million dollars. The other alternatives prove to be uneconomical.” Patterson further related that in November 2013, the National Industrial Commercial Investments Limited had publicly advertised for bids for a Public-Private Partnership to design and construct a new Demerara Bridge crossing or other form of fixed crossing. In that advertisement, he said mention was made that three possible sites- New Hope, Peters Hall and Houston had been identified in the pre-feasibility study for the new bridge but no one had successfully taken up the offer. Another piece of evidence, he said was a November 7, 2014 Cabinet paper that requested GYD$103.5 million  for a feasibility study for a new bridge crossing that concluded that “high-level fixed lane bridge at Houston-Versailles is the only economically feasible alternative.”

Jagdeo has since expressed surprise at the coalition government’s preference for the same locations to link the east and west banks of the Demerara River and has suggested that that area has been suggested because former People’s National Congress Reform (PNCR) executive member, Stanley Ming purportedly owns a tract of land at Versailles, West Bank Demerara.

On the issue of a non-disclosure agreement, he said that was confined to the protection of proprietary information by companies.