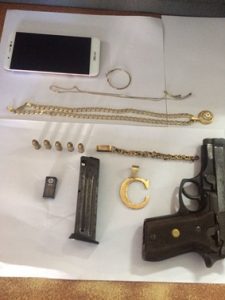 A gun and ammunition as well as jewellery that police said are linked to an armed robbery committed on a gold miner on September 2, 2017 at the East Coast Demerara bus park.

A bandit, who robbed and shot a miner, surrendered to police five days later with part of the stolen jewellery and admitted to being in possession of an unlicensed gun and ammunition after investigators traced the owner of a car that one of the bandits used, the Guyana Police Force said in a statement.

The 33-year old man of  South Cummings Lodge, East Coast Demerara turned himself in to the Brickdam Police Station on Thursday in the company of his lawyer.

Investigators are looking for a second suspect.

Police said the man admitted to robbing and later shooting the miner, a a 44-year old man of Buxton Middle Walk while he was a passenger in a minibus at the East Coast Bus Park, Hinck Street Georgetown.

The incident occurred at about 3PM on 2nd September , 2017

He told police two suspects, one armed with a handgun pounced and relieved him of his gold and diamond chain valued GYD$950,000.00 and fled in the direction of the Stabroek Market.

“The armed suspect was pursued by the victim and during a confrontation, at the Stabroek Market, he drew his firearm and discharged several rounds, hitting the victim on his left hand and buttock; after which the gunman quickly proceeded to a parked motor car where he concealed something and escaped, leaving the car locked,” police said in a statement. 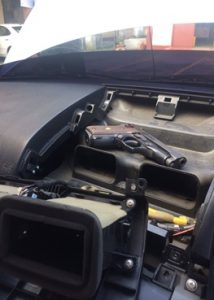 A handgun that police said was found in a car at the Stabroek Market area shortly after a gold miner was robbed of jewellery at the East Coast Demerara bus park.

Police said the vehicle was towed to the Brickdam Police Station and later searched in the presence of its owner who provided a key to gain access and who claimed to have rented the car to a Kitty resident since last July.

The victim who was taken to the Georgetown Public Hospital where he was treated and later discharged.