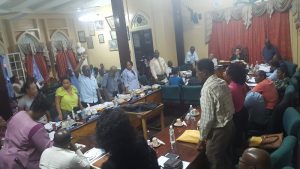 The 13 City Councillors voting to enter into renegotiations with Smart City Solutions.

After a heated debate and persuasive arguments across the political divide,Georgetown’s City Councillors on Thursday voted by a majority of 13 to an overall  12 to approach Smart City Solutions (SCS) to renegotiate the controversial parking meter contract.

Actually,  seven of the councillors voted to await the outcome of pending court cases before deciding the next move and five voted to scrap the contract altogether.

Signigicantly, Councillor Gregory Fraser of the People’s National Congress Reform (PNCR)-dominated A Partnership for National Unity (APNU) voted with Alliance For Change’s Sherod Duncan and Lionel Jaikarran, who is the Deputy Mayor, and the People’s Progressive Party’s Councillors Khame Shatma and Bisham Kuppen to scrap the contract. 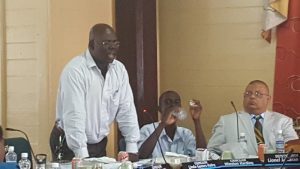 Instead of burdening the citizens with metered parking, he called on the Council to aggressively collect the more than GYD$2 billion in rates and taxes that are outstanding.

At the end of almost four hours of deliberations, Mayor Patricia Chase-Green said the Town Clerk, Royston King would have to write Minister of Communities Ronald Bulkan seeking an extensionof the already four-month long suspension of metered parking in Georgetown.

She said next Monday’s statutory meeting would see the Council deciding on who will be the two members of the public to be included in the negotiating team.

That means the Council’s negotiators and the company will have to consider all the findings contained in the report, and hold public meetings to discuss the findings and recommend areas for the new contract. That would require, according to the report, SCS to “provide any and all documents” within reasonable time. Those documents, the report states, must include financial records to know the true initial capital expenditure to ensure City Hall and citizens know they are getting the best deal.

Now that City Councillors have agreed to continue metered parking with SCS, the negotiating committee will have to be provided relevant documents such as a feasibility study, business plan, environmental impact assessment as well as ensure that the necessary due diligence is observed. That recommendation also provides for a legal review of the parking meter bylaws to possibly make certain amendments and have an independent project analysis done to offer proper guidance.

APNU Councillor, Oscar Clarke, who set the tone for the debate and signaled very early how the majority of the councillors would have voted, said if Smart City Solutions does not accede to City Council’s invitation to renegotiate the parking meter contract, City Hall could pull out of the troublesome deal.

“If the company disagrees, it puts us in a position to withdraw from the contract,” he said. Clarke added that the Council should start off from a position that there is  contract that is legal and binding.

Clarke, a former PNCR General Secretary, said when metered parking returns, persons will have to decide whether to travel by buses, bicycles or taxis as happens in bug cities across the world.

Deputy Mayor Jaikarran reiterated the need to respect the rule of law particularly as it related to the limit of GYD$250,000 that the Town Clerk is permitted to enter into any contract for on behalf of the Council. The parking meter investment is worth US$10 million, according to the Council.

“From the inception, the parking meter contract lacked transparency. It was shrouded in secrecy,” he said. He conced that there was no chaos or confusion during the brief period there was paid parking.

The PPPC’s Sharma said he could not support metered parking because of the adverse economic impact it had had on business activity. “The town was nothing less than a ghost town,” he said.

APNU Councillor Henry noted that 166 of the 345 persons questioned about the preference for parking meters live in the countryside and only come to town to work.

The AFC’s Duncan lamented that it would be illogical to enter into negotiations with a company that has bluntly refused to provide information to the Council’s negotiating team unless they signed a non-disclosure clause. “We cannot do business with them. They have not dealt with us in good faith,” he said. He urged the Council to rescind the contract.

APNU Councillor, Alfred Mentore, who was among the five voting to await High Court rulings on a number of parking meter cases, said it was the Town Clerk who entered into an agreement with Smart City Solutions and that it should be revoked and opened to a rendering process.

APNU Councillors Monica Thomas, Welton Clarke, Heston Bostwick and Junior Garrett were among those who supported a renegotiation of the deal now.

At the end of the debate, Councillor Malcolm Ferreira became extremely angry when the Town Clerk remarked that the Ferreira-led negotiating committee exceeded its mandate.

That prompted Ferreira to repeatedly attempt to defend his position, but the Mayor disallowed him until hearing the Town Clerk again.

Mayor Chase-Green said that issue was off the table because the Council had already approved the Terms of Reference and adopted the report.