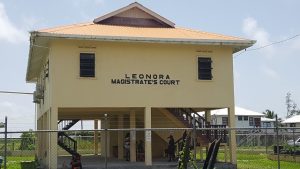 A drunken policeman, who hit down a pedestrian, was Tuesday  fined GYD$7,500 after he pleaded guilty to driving under the influence of alcohol.

Constable Satrohan Gowkarran’s driver’s licence was also endorsed as a notation that it was the first such offence for which he has been convicted , the Guyana Police Force said. He appeared before Magistrate Roshell Liverpool at the Leonora Magistrates’ Court.

Police said the investigation into the accident is still incomplete.

The victim, who was transferred to the Georgetown Public Hospital,  is said to be in a stable condition.

Eyewitnesses said although Gowkarran was drunk, he was not wrong because the pedestrian walked into the path of the vehicle and the driver had little or no time to avoid hitting him.