“Big Head” charged with the murder of 18 month old niece 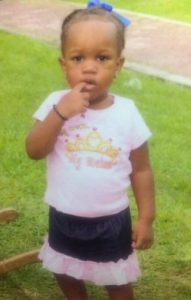 A 20-year old man, who allegedly tossed his 18-month old niece out of the window and buried her body in a swampy area of Sophia, Greater Georgetown during an attempt to steal her earrings, was Tuesday charged with murder.

Sherwin “Big Head” Roberts,an unemployed of 68 ‘A’ Field Sophia, Greater Georgetown, was not required to plea to the indictable charge after it was read to him by Chief Magistrate, Ann Mc Lennan.

He is accused of the murder of Ronasha Pilgrim at 98 North Sophia on September 01, 2017.

Police have already said that between 3:30 and 4 AM on September 1, Pilgrim and her two 10 and 12-year old siblings were left at home by their father who is a security guard.

Investigators were told that Roberts broke a window, entered the house and attempted to take off his niece’s earrings. When she screamed, he threw her out of the window into the swampy yard.

The Guyana Police Force said as the alleged perpetrator was leaving, he placed a pile of wood on top of her body which submerged under almost two feet of water.