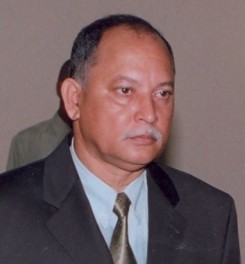 Former Chief Executive Officer (CEO) of the state-owned National Communications Network, Mohamed ‘Fuzzy’ Sattaur died on Saturday as a result of illness at a city hospital.

Former President, Donald Ramotar, in paying tribute to his long-time party comrade and co-worker at the Mirror newspaper, recalled that he was one of the competent and outstanding staff members there. “He was a very talented gentleman. He was a very good writer. He was also a very good artist who did a lot of the editorial cartoons and a very good researcher,” said Ramotar, a former PPP General Secretary.

Up to the time of Sattaur’s passing, he was Administrator of the Cheddi Jagan Research Centre, an entity that is closely associated with the opposition PPP.

He recalled that Sattaur was the PPP representative at the Guyana Elections Commission’s now closed computer section that had documented the general elections results.

“He will be missed a lot by his friends and his colleagues and I personally would miss him very  dearly,” said Ramotar, in extending condolences to his Sattaur’s immediate family members, relatives, friends and colleagues.

At the peak of alleged financial irregularities at NCN, then President Ramotar had asked Sattaur to resign or be fired as the party was preparing to face the keenly contested 2015 general elections.

More recently, as former CEO of NCN, he had been questioned by the Guyana Police Force’s Special Organised Crime Unit about the dismantling of the transmission station at Sparendaam, including the 500-foot tall AM transmission tower, and the sale of the land.

SOCU has been probing the development and sale of those lands at Goedverwagting and Sparendaam to former President Bharrat Jagdeo, then government ministers and other top government officials.