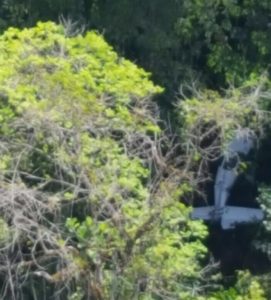 The plane hanging on to trees in Guyana’s jungle

He is Captain Imran Khan

He said the search and rescue team, made up of Special Forces of the Guyana Defence Force (GDF),  were now in recovery mode. He said the body would be taken out to Mahdia and flown to the city early Monday morning.

Sources said his body was found on the ground, even as the light aircraft hung on trees.

Field said GCAA investigators would Monday seek to determine why the plane crashed. He could not comment on unofficial information that the Cessna 206 single-engine plane, bearing registration markings 8R-GFM, was flying at low altitude in hazy conditions and one of its wings might have clipped a mountain.

The  plane, which was shuttling between Chai-Chai and Mahdia was scheduled to land at Mahdia at 8:47 AM Sunday but it did not. An Emergency Transmitter Locator (ELT) signal was picked up at 9:08 AM, triggering a search and rescue operation.

The Special Forces team arrived at the thickly vegetated and mountainous crash site on foot at about 6 PM Sunday.