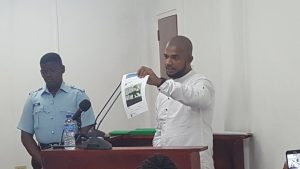 Andre Guillard holding up a print-out of a post on his Facebook Profile. That post, he said, merely depicted a photo of a “long black gun” similar to the one that he claimed Nizam Khan had shown him in June 2015 as the weapon that he would give him to kill President David Granger in exchange for GYD$7 million.

The man, who claimed that more than two years ago he was offered GYD$7 million and shown a long black gun with which to kill President David Granger, lied to the Commission of Inquiry because he swore with the Bible instead of the Quran, Attorney-at-Law for the Guyana Police Force, Ian Chang said.

Chang noted that Andriff Guillard twice took the oath with the Bible before testifying at the Commission of Inquiry into the alleged assassination plot against the President, although he said he converted to Islam several years ago and that he is bringing up his son in the Muslim faith.

Guillard has maintained that Nizam Khan, his one-time neighbour and friend, had offered him GYD$7 million on a unspecified date in June 2015 to kill Granger. He first reported that alleged plot on March 29, 2017. The Police Legal Adviser, Retired Justice of Appeal, Claudette Singh has said the evidence was very weak to charge Khan with incitement to commit murder.

The retired Chief Justice argued that Guillard deliberately took an oath on a Holy Book that “was not binding on his conscience” or did he affirm.

“Guillard falsely swore on the Bible which did not bind his conscience and did not affirm. What was stated before this tribunal is therefore of no evidential value. He has committed a fraud on this Commission. His falsities know no bounds or limits,” Chang told Chairman of the Commission of Inquiry, Retired Assistant Police Commissioner, Paul Slowe.

Calling Guillard a “con artist of no mean order”, the Senior Counsel said it does not matter whether Guillard was willing to undergo a lie-detector test because that relates to truth in out-of-court investigations and not in courts or Commissions of Inquiry. “It is irrelevant whether or not he is prepared to undergo a polygraph test. In a court of law or a Commission of Inquiry, it is the sanctity of the oath of affirmation which is relevant to truth not polygraph tests,” said the Senior Counsel.

The Attorney-at-Law concluded that the Major Crimes Unit of the Police Force’s Criminal Investigations Department should be  complimented for “uncovering the falsity of Guillard’s mischievous allegations rather than being castigated for any investigative cover-up”.

Chang further charged that the time-line of events shows that Guillard was on a mission to have Nizam Khan locked up after it was clear that he had been behind efforts to have him removed from the building he had been occupying. The lawyer noted that the time Leonard Baldeo had reported that on March 26, 2017 Guillard had offered him GYD$50,000 to give police a statement saying that he had been present when Khan had offered him GYD$6 million to kill the President. “If he had only taken that offer, Nizam Khan’s goose would have been cooked,” he remarked.

On March 27, 2017, he said before Guillard could have procured any other person to make a false report to the police, Stephen Persaud made an allegation at the Grove Police Station that Guillard had removed and taken away his three tyres.

He said as a matter of urgency Guillard then urgently solicited the help of Travis Chase on the night of March 28 and to make the report to the Ministry of the Presidency on the morning of March 29, 2017. “Stephen Persaud was 21 years old and Guillard felt that Nizam Khan was having an affair with his wife and ghe had un-honoured monetary debts to Nizam Khan,” Chang said.