14 persons hurt after minibus slams into tractor trailer – driver was allegedly drunk at the time. Four children are currently hospitalized while several adults are nursing injuries about their body after the minibus they were traveling in slammed into a tractor trailer on the No. 19 Public road, Corentyne late Thursday evening.

From information gathered, the persons were reportedly heading back home after taking a relative to the New Amsterdam Public Hospital when they got into the accident.

Police in a release disclosed that the 47-year old minibus driver and the driver of the motor lorry were in custody assisting with the investigations.

The release stated that of the eleven passengers in the bus, four are currently hospitalized; three at the New Amsterdam Hospital and one at the Georgetown Public Hospital and are said to be in serious but stable conditions.

Investigations revealed that the motor lorry GLL 8959 with trailer TSS 458, was proceeding eastern direction while the mini bus, BNN 9791 was heading in the same direction. 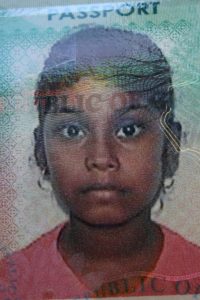 INJURED: Shariza Khairoodin was transferred to the Georgetown Public Hospital.

vehicle which reportedly did not have reflective lights.

One of the passengers, Dinesh Looknauth, of Topu Village, Ablion Corentyne stated that they brought a relative to the New Amsterdam Hospital and were proceeding home when the collision occurred. He said that “we were traveling good and then all of a sudden we ram into something and the is all I remember”. He sustained a laceration on his head and hands.

Another passenger, Shafraz, who was seated in the front passenger seat disclosed that the driver was blinded by a bright light seconds before the collision.

“Just before we crash, we see a bright bright light and then he just crash and like I black out. When I wake up, we deh hospital”. 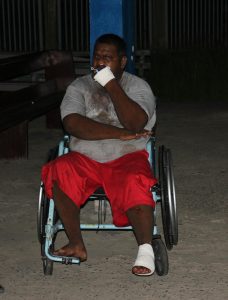 According to a police source, the driver was given a breathalyzer test were it was discovered that he was above the legal drinking limit.