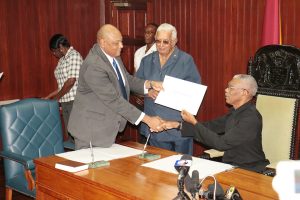 Raphael Trotman receiving his instrument of ministerial appointment from President David Granger in 2015.

Even as Minister of Natural Resources, Raphael Trotman scoffed at suggestions that recent protests by small miners were orchestrated by A Partnership for National Unity (APNU) to undermine him, he Thursday said the Guyana Geology and Mines Commission (GGMC) has been instructed to grant thousands of acres of land to mining syndicates.

Asked whether moves to grant the mining syndicates land rights immediately, he said he met with many of them and he was taken aback by the protest action. “They seem quite satisfied so I am somewhat surprised that they are protesting but coming out of the days of the PNC (People’s National Congress) itself I am well aware that nothing good comes without some agitation so I think it’s good they are mobilised and we are mobilised and GGMC (Guyana Geology and Mines Commission) has been given a firm instruction which they are working to expedite this process,” he said.

Trotman said the process should be wrapped up by the end of August.

He reasoned that the protest- the latest outside the office of the Attorney General and Minister of Legal Affairs, Basil Williams- was a way of the miners saying “until they have the land in hand they won’t relax”

“I know Mr. Williams, in addition to being the Attorney General, is the Chairman of the PNC so maybe they are trying to get his attention,” he said, adding that he would inform Cabinet that the matter is being dealt with comfortably and capably by the GGMC.

Asked whether the protests were aimed at him politically, the Alliance For Change (AFC) leader said “the coalition is strong. We doing our job. I will defend the GGMC. They are working overtime.”

He said government rather than the Minister has endorsed mining syndicates based on a memorandum that he had taken to that executive decision-making body for approval. “It is not a Raphael Trotman matter to  frustrate,” he said.

Saying he has been assured that the mining syndicate plan has been fast-tracked following a meeting with senior managers of the Guyana Geology and Mines Commission (GGMC). “Everything is in place for the syndicates to be given land and for their applications to be processed,” the Minister told Demerara Waves Online News.

The Minister of Natural Resources said he has since signed a session order for a number of mining syndicate members, who have met the GGMC’s regulatory requirements, for applications to be processed speedily. “There is no issue. GGMC  is working overtime to have these allocations made and I have already signed the session order for a number of them to receive their land rights immediately,” he said.

Trotman said one of the areas of concern is a decision to limit the allocation of land to 10 mining blocks, which each averages at 1,200 acres of lands. In response to requests for more land amounting to as much as 30 blocks, Trotman said the miners have to first prove that they have the capacity to work the land in the pilot project

“We have said to them that we need to see demonstrations of good stewardship of the land, how you have organised yourselves, that you are mining, etc,” he said. The Minister said give Guyana’s commitment to a green economy, GGMC cannot adequately manage some mining activities.

Among the good mining practices that the Natural Resources Minister hopes that mining syndicates will engage in are good environmental management, proper construction of the mining pits, proper treatment of workers and addressing social ills such as drug trafficking and human trafficking.

Earlier Thursday, AFC Chairman brushed aside suggestions that the protests by the mining syndicates in recent weeks have been instigated by APNU to target him politically.