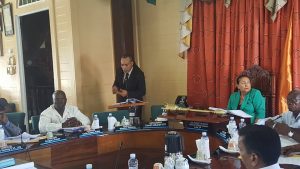 Chairman of the City Council’s Parking Meter Negotiating Committee, Malcolm Ferreira briefing the full council on the findings and recommendations of a four-month long examination of the controversial parking meter system.

Georgetown’s Mayor and City Council on Thursday agreed to postpone a vote on the fate of the metered parking system until later this month to allow stakeholders and the wider public to read and comment on a report on metered parking that found that Smart City Solutions (SCS) withheld vital information from the Council’s negotiating committee.

“SCS refused to provide proof of investment and were informed by the Committee that no further discussions will take place unless and until the documents requested are submitted to the Committee,” states the report, adding that similar concerns were registered by Attorney General, Basil Williams and representatives of the Ministry of Finance.

In the weeks leading up to the launch, SCS and City Hall had said the company was investing US$10 million in the metered parking project in Georgetown.

Fourteen councillors voted for the report to be available at several places for the public to submit in writing concerns and for the Council to defer consideration of the future of metered parking until August 25, 2017.  PPP Councillors Bisham Kuppen and Khame Sharma voted against and APNU+AFC Councillors Alfred Mentore abstained.

Prompted by a desire by a councillor to seek more time to study the report, Mayor Patricia Chase-Green said copies of the report would be placed at the Town Clerk and Treasurer’s offices and the National Library and also provided to any other person including the media. 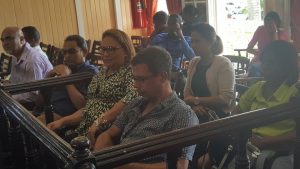 Members of the Movement Against Parking Meters sit in the City Council’s public gallery listening to a presentation on the findings and recommendations of a committee that studied the implications of the parking meter agreement between City Hall and Smart City Solutions.

However, the Mayor recalled that the Council had previously recommended an additional one month extension on top of the original three months and she insisted that no one else could direct her what to do. “If I, as Chair of this committee who is dealing with the parking meter and I think the Councillors need more time  to….nobody is going to push my button to do anything in a haste, nobody,”  she said. Chase-Green stressed the need for transparency,

Members of the Movement Against Parking Meters (MAPM), who were in the public gallery of the Council Chamber, expressed shock at the decision to vote on the fate of the controversial metered parking system. They whether there would be another ‘final’ report after receiving public comment.

“This report is absolutely final. There are no other things that can be added in here. There  no other documents that can be now submitted. This is final. You had four months, that’s done,” said MAPM spokesman, Don Singh. His colleague, Komal Ramnauth, reiterated MAPM’s  demand that “we want complete revocation.”

Councillors absent from Thursday’s special sitting included Oscar Clarke, Welton Clarke of A Partnership for National Unity as well as Sherod Duncan and Deputy Mayor, Lionel Jaikarran of the Alliance For Change (AFC). Th AFC maintains that it does not support the paid parking deal between City Hall and Smart City Solutions (SCS).

The options for consideration by the Council include continuing the parking meter system with SCS after renegotiation by a committee on the Council’s behalf to address all points and findings contained in the report, and hold public meetings to discuss the findings and recommend areas for the new contract. That would require, according to the report, SCS to “provide any and all documents” within reasonable time. Those documents, the report states, must include financial records to know the true initial capital expenditure to ensure City Hall and citizens know they are getting the best deal.

If City Hall agrees to continue metered parking with SCS, the negotiating committee will have to be provided relevant documents such as a feasibility study, business plan, environmental impact assessment as well as ensure that the necessary due diligence is observed. That recommendation also provides for a legal review of the parking meter bylaws to possibly make certain amendments and have an independent project analysis done to offer proper guidance.

That, the report states, will require further suspension of the implementation of the metered parking system pending the court rulings. The committee members noted that if the Council awaits the court decisions, they can then be guided which of the four previously stated options should be accepted.

Assistant Town Clerk, Sherry Jerrick was the Secretary to the Committee.