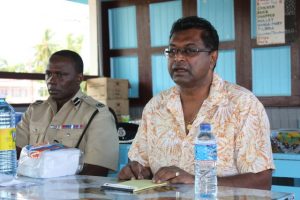 A Berbice branch of the Customs Anti-Narcotics Unit (CANU) is set to be opened at Springlands, Corentyne to aid law enforcement agents  in the fight against drug trafficking, Public Security Minister, Khemraj Ramjattan has announced.

The announcement was made at a public meeting on Sunday at No. 66 village, Corentyne against the backdrop of an increased incidence of drug trafficking especially in Berbice.

Minister Ramjattan stated that a Guyana Sugar Corporation (GuySuCo) building has already been identified to be converted to the first ever CANU office in Berbice.

“We need to have this up and running very shortly so that we can have this core set of people to deal solely with the apprehension of drug traffickers and these are persons who have had intense training to deal with such problems,” the minister said.

He stated that the CANU unit would help strengthen the Berbice Police Division which has been diligently working to combat the problem.

“From the reports I got, the police have been doing a great job trying to deal with this problem which seems to have increased in the Berbice area. One set of dope is being planted and sold and trafficked and we need to quickly nip this in the bud to prevent it from turning from bad to worse”.

The Public Security Minister called on the general populace to report any suspicious activities that can lead to the capture of the “leading men” behind these operations. He noted that alternative punishments are also being sought for persons who are found with small amounts of narcotics.

So far, the Berbice Police Division has conducted a number of successful operations in the past weeks leading to the seizure of over 100 kilos of marijuana.

CANU, which is unit of the Public Security  Ministry,  was established in an effort to assist in curbing narco-trafficking. This agency has been in for over existence eight years.

That unit will form part of the policy-making National Anti-Narcotics Agency (NANA) that will include the Guyana Revenue Authority’s Drug Enforcement Unit and the Guyana Police Force’s Narcotics Section.