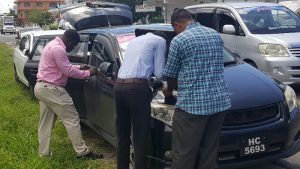 Investigators check the wagon for clues to an armed robbery at Coffee Bean, Church Street.

Bandits Tuesday morning apparently traced two men from a city bank to a cafe where they assaulted and robbed them of an estimated GYD$1 million, sources said.

The two customers-a Guyanese and a Malaysian-were gun butted before the driver of the vehicle surrendered the keys. 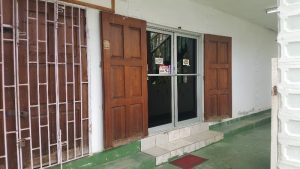 A source said the bandits were overheard saying “hurry up, hurry up. Wheh d money? Wheh d money?” The victims believe they were traced from Scotiabank.

The thieves then entered the wagon, took away the money and left with the keys.

A source said Coffee Bean’s staff were told to lie on the ground while the bandits took away their valuables.

Police were seen dusting the car for fingerprints.

Investigators hope to examine surveillance video footage in an effort to identify the perpetrators.