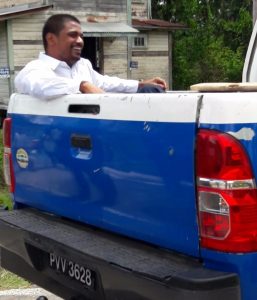 MURDER ACCUSED: Ryan Singh as he was leaving the Sister’s Village Magistrates’Court.

The man, who allegedly knifed his teenage common-law wife to death and fled to neighbouring Surinameay, was Tuesday arraigned for her murder.

Thirty-year old Ryan Singh was not required to plea to the indictable charge when it was read to him by Magistrate Alex Moore at the Sister’s Village Court.

He is accused of the murder of 16-year old Parbattie Lakhpaul on July 29, 2017 at her residence, Number Two Village, East Canje, Berbice.

Singh was remanded to prison until September 26, 2017 by which time police investigators would complete additional work.

Outside the courtroom, Singh shouted at Lakhpal’s mother, telling her to find the person who killed her daughter.

The accused was arrested in Nickerie, Suriname last week and handed over to Guyanese police in keeping with cooperation protocols between the law enforcement agencies of the neighbouring South American country.