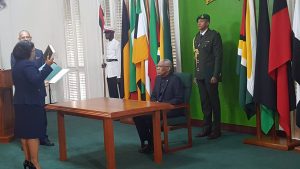 Three major utility companies have for the year so far racked up almost 400 customer complaints and has had to refund a total of GYD$30 million to customers, according to the Public Utilities Commission (PUC).

Major reasons for the reasons include continuous payment for phone service that has not been provided, over-billing for electricity consumption, and “billing issues” with Guyana Water Inc. Most of the complaints against GTT, officials  said, were made by customers in Berbice.

The PUC plans to open an office on the Essequibo Coast.

Briefing the media on its work, the utility regulator reported that of the 505 complaints received this year against the 355 were against GTT; 124 against Guyana Power and Light; 23 against Guyana Water Inc, and 20 against Digicel

Bourne said 320 of the complaints against GTT were for technical issues that consumers had been already reported to the phone company and given a reasonable time to resolve. “What we have noted is happening is when persons reported their issue here to the PUC, their matters are resolved within a very short period,” she said.

She said of the 303 pending matters, consumers have informed the PUC that about 150 have been resolved. PUC Chairman, Attorney-at-Law, Dela Britton said the utility companies have all assured the commission that they would make every effort to  reduce the number of pending reports. “When we met with the stakeholders, the utilities they have given us all assurances with respect to the matters that are still pending and that in the future that ‘we will try to resolve that in a speedy manner’ so that the next time you meet with us we don’t have large and daunting numbers to report on,” she said.

Of the 124 complaints against GPL, 46 were for allegations of tampering or meter bypass, 28 for application of service, 18 for technical issues, 11 for billing queries, 11 for disconnection of service, and five each for change of tenancy and request for compensation.

The PUC Chairman, meanwhile, said the regulator is not currently legally empowered to address poor land and mobile data services until the Telecommunications Act and regulations come into effect. She said the PUC is aware that Digicel to GTT text messaging has not been working for weeks but could do little unless the Commission receives a complaint.