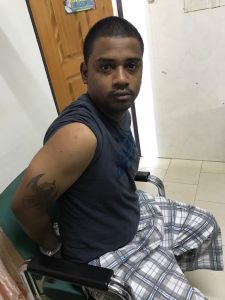 MURDER ACCUSED: Ryan Singh shortly after he was arrested.

The 25-year old man, who is the prime suspect in the killing of his 16-year old reputed wife, was caught Wednesday at Crabwood Creek, Springlands area, a top police officer said.

Ryan Singh was spotted by public spirited citizens based on a wanted bulletin that had been issued and he has since told investigators that he was staying in an abandoned house, Berbice Divisional Commander, Assistant Police Commissioner, Paul Williams said.

He is accused of killing 16-year old Parbattie “Roseanna” Lakhpaul of 369 Number 2 Village, East Canje, Berbice on July 26, 2017 after she told that their relationship was over.

He was arrested at about 11:30 AM Wednesday near the Guyana-Suriname border.

Singh, however, said he could not remember where the house is located, said Williams. “He not showing the place,” the police officer said. 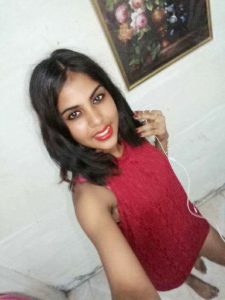 Singh is not from Berbice, but he belongs to 48 West Ruimveldt Estate Housing Scheme. Records show that he had stabbed his then girlfriend in 2015 before fleeing to Berbice. He was never charged with that offence, but charged with public fighting several years ago.

The Guyana Police Force has said that Singh and Lakhpaul had a misunderstanding and the suspect was asked to leave the home which he did but only to return this morning, allegedly committed the act and fled the scene.

A knife suspected of being the murder weapon was found in a cistern near the teenager’s body which bore a laceration to the throat.