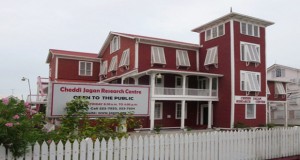 The Cheddi Jagan Research Centre Inc (CJRC); a company closely associated with the opposition People’s Progressive Party (PPP),  on Wednesday claimed partial victory against government’s efforts to quash a 999 year lease for Red House where the centre is located.

A legal battle ensued after President David Granger on December 29, 2016 revoked the lease and ordered that the Centre remove from Red House by December 31, 2016, based on Attorney General, Basil Williams’ advice. However, Nandlall said the Chief Justice ruled against the Attorney General after receiving written and oral submissions on whether the case should be dismissed. He said the Chief Justice “overruled every submissions made by the Attorney General, and refused his request that the Cheddi Jagan Research Institute’s case be dismissed and that they be ejected from possession.”

The Attorney General’s Chambers has not commented on the High Court’s decision.

Nandlall said the High Court “upheld the submissions made on behalf of the Cheddi Jagan Research Institute that there are serious issues to be tried that cannot be determined at the interlocutory stage; and in order to preserve the status quo pending the hearing and determination of these proceedings, the Court granted to the, Cheddi Jagan Research Institute, the Applicant/ Plaintiff, the two interlocutory Conservatory Orders for which they applied.”

Nandlall explained that one of the Conservatory Orders prevents or restrains the State or any of its agents “from ejecting or evicting” CJRC or any of its servants or agents from any of the leased property called Red House, comprising lots 65, 66 and 67 High Street, Kingston, Georgetown  “or in any manner whatsoever interfering with the Applicant’s/Plaintiff’s occupation and/or possession and/or peaceful and/or quiet enjoyment” of the leased premises until the hearing and determination of this action or until further Order of the Court.

The second interlocutory Conservatory Order prevents the State or any of its agents or servants “from removing any documents, photographs, artifacts, souvenirs, furniture, fixtures and fittings, appliances and/or any other movable property” from the leased property. 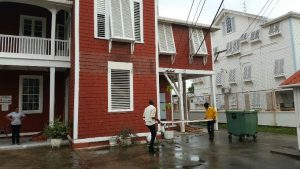 FLASH BACK: Ministry of the Presidency workers fetching away the Cheddi Jagan Research Centre’s sign after pulling it down from the front of the building.

The records show that Red House is described as the Lease of Government Land for Educational/Research Purposes, number 3068.

At the time of revoking the lease, President Granger had also directed the Minister of State that the building be assigned to house “The National Trust of Guyana, its staff, stores and equipment” that had been housed in the Valerie Rodway Building on Carmichael Street, with effect from January 1, 2017.  Granger had hoped that the new home of the National Trust would have allowed it to better able to fulfill its mandate to preserve Guyana’s national patrimony and to promote an appreciation for the nation’s heritage.”

During the early days of the legal battle, Ministry of the Presidency staff had been deployed to Red House where they had pulled down the sign board. Police, armed with rifles, have since been deployed to guard the property.

The CJRC staff has since removed all major works and other property associated with the late Dr. Cheddi Jagan, widely regarded as the architect of Guyana’s first mass-based political party.