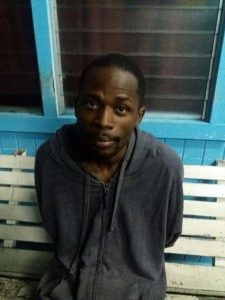 Stafrei Alexander shortly after he was caught at Hampshire village at about 8 O’clock Saturday night, July 29, 2017.

One of the prisoners, who escaped earlier this month from the burning Georgetown Prison, was Saturday night captured at Rose Hall, police said.

Head of the Criminal Investigations Department, Wendell Blanhum said Stafrei Alexander was nabbed at Toopoo Street, Hampshire Village, Corentyne. “He was heading to a particular house having emerged from his hideout when he was arrested,” Blanhum told Demerara Waves Online News.

Investigators have since arrested four persons on suspicion of harbouring a fugitive, he said.

Police said there was no confrontation between the security forces and Alexander who was wanted for escape from lawful custody at the Georgetown Prison and murder. Prison officer, Odinga Wain Wickham was shot dead during Guyana’s worst prison unrest on Sunday, July 9, 2017.

This now brings to seven the number of prisoners who are yet to be caught from two break-outs this month. They include a Bartica massacre convict, Mark Royden Durant also known as Royden Williams.

Police about one week ago believed they had shot and injured Alexander in a thickly vegetated area of Ankerville, Port Mourant.

“At the time of his re-capture Alexander had an existing wound and is receiving medical attention at an undisclosed medical institution. While the nature of the wound has not been confirmed at this time, it is believed he sustained the wound during a previous confrontation with the Joint Services,” government’s Department of Information said in a statement.