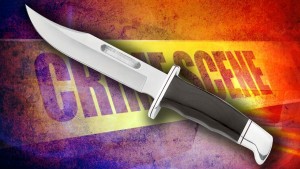 A 16-year old female was Saturday killed at her East Canje, Berbice home and police said they have since launched a manhunt for her 25-year old reputed husband who could not come to grips with the reality that the woman dumped him.

“Investigation revealed that recently the couple had a misunderstanding and the suspect was asked to leave the home which he did but only to return this morning, allegedly committed the act and fled the scene,” the Guyana Police Force said in a statement.

Homicide detectives said at about 12:55 PM, the unemployed man allegedly committed the act.  Police have since found a knife suspected to be the murder weapon in a cistern near the teenager’s body. “The body which bore a laceration to the throat , suspected to have been inflicted by a sharp instrument is presently at the Arokium Funeral Parlour awaiting a post-mortem examination on Monday.