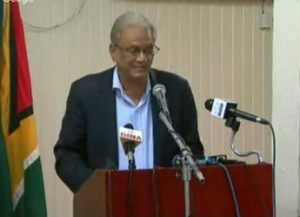 Four days after Dr. Rupert Roopnaraine resigned as a government minister, he has pulled it back and decided to remain a minister and member of the Cabinet, Minister of State, Joseph Harmon announced Thursday.

Roopnaraine’s decision to stay on was made at a meeting he held with President David Granger in the presence of the Minister of State on Wednesday afternoon. “It was clear after that meeting that Dr. Roopnaraine will continue to serve as a minister in the government, as a member of parliament and as a valued member of our Cabinet,” Harmon told a post-Cabinet news conference.

Describing the talks about Roopnaraine’s new portfolio as Minister of the Public Service as “very fruitful”, Harmon said Dr. Roopnaraine’s contribution to Guyana and his “ability and capacity to contribute” were noted by the President.

The Minister of State said the Guyanese leader was “very happy that Dr. Roopnaraine has actually pledged to continue serving in the interest of Guyana.”

Harmon confirmed that one of the reasons that had been given in the resignation letter was Roopnaraine’s health condition that was preventing him from serving at the desired level. However, the Minister of State said “the President gave him the assurance that the support which he needs to ensure that he continues to function effectively will be given to him in that regard.”

Roopnaraine, 74, last Sunday dispatched the resignation letter to the President, just about one month after he had been removed from the post of Minister of Education apparently because of alleged poor performance. However, Roopnaraine’s Working People’s Alliance (WPA) political party has cited the recent 2017 National Grade Six Assessment results as proof that the former Minister of Education’s hard work has been paying off.

The WPA on Wednesday said Roopnaraine had engaged his fellow party executives about his decision to resign from the little more than two-year old  APNU+AFC-led administration.

the WPA is part of A Partnership for National Unity which includes Granger and Harmon’s People’s National Congress Reform (PNCR).