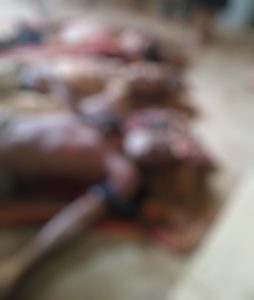 Three Guyanese miners have been shot dead and one of their colleagues injured in Venezuela during an attack on a mining camp, police here said Friday.

Interior Divisional Commander,Senior Superintendent Ravindradat Budhram told Demerara Waves Online News that the incident did not occur in Guyanese territory. “They were working with a Brazilian at Imataka backdam in Venezuela which is about three hours from the border,” he said.  The incident occurred at about 3 AM on Wednesday, July 19, 2017.

The dead and injured were taken to the Port Kaituma Hospital at about 6 AM Thursday. The deceased are Vernon Eudoxie,51, of Fitzburg, Port Kaituma;  ex policeman Colwyn Solomon,23, of Port Kaituma and Georgetown, and 19-year old Samuel Moses of Oronoque, Port Kaituma.

Injured is 22-year old Joel Paton of Supenaam and 46-year old Andre Pilgrim of North Ruimveldt.  Paton was referred to the Georgetown Public Hospital and Pilgrim was admitted to the Port Kaituma Hospital.

The Divisional Commander said the bodies and the injured man were taken to Port Kaituma at about 6 AM Friday by colleague miners. The bodies would be flown to Georgetown for post mortem.

Budhram said official information about the incident is sketch because no contact has been made with Venezuelan authorities. “Guyanese police cannot go across in Venezuela to investigate,” he said.