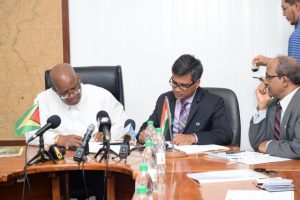 – Minister of Finance, Winston Jordan (left) and Sailesh Prasad, Resident Representative on behalf of the Export-Import Bank of India, signing the line of credit agreement today the Ministry of Finance’s boardroom

Health care delivery in Guyana is expected to benefit from a multi-million-dollar line of credit from India. Minister of Finance, Winston Jordan Wednesday signed a US $17.5M line of credit with the Export/Import (EXIM) Bank of India to upgrade primary health care facilities.

“When completed, residents of the immediate and surrounding areas can expect to benefit from improved health care delivery and services. The provision of quality health care remains the primary objective of this government”, Minister Jordan was quoted as saying in a statement issued by Government’s Department of Public Information (DPI).

He added that the upgrade of these facilities will also ease the burden currently placed on the Ministry of Public Health’s budget, which already caters for evacuating hinterland patients to the Georgetown Public Hospital during emergencies.

The Minister also highlighted that the government and India shared strong relations since formalising relations in May 1966.  The two countries have since partnered on several projects including the establishment of a Centre of Excellence in Information Technology, the construction of a bypass road between Ogle and Diamond, a new ferry for Region One District and support for the agriculture sector among others.

Minister of Public Health, Volda Lawrence who witnessed the signing, indicated that primary health care is the most important level of health care. “Therefore”, she added, “it is incumbent on her Ministry to ensure that services including prevention, promotion, rehabilitation and palliative care are delivered.

The Minister underlined, “It is our intent to ameliorate the services at our health centres and clinics since these facilities play a critical role in a population’s health. Our health vision 20/20 characterises a working and comprehensive primary care programme, since we recognise the impact that such a service has on the status of individuals.”

His Excellency, Venkatachalam Mahalingam, High Commissioner of India to Guyana said, “One of the companies which have been given by EXIM Bank, will be chosen as the project management consultant who will prepare the detailed project report, and then the project will take off. I’m sure that the process of choosing one 0f the companies as project management consultant will be done soon.”

The Public Health Minister expressed gratitude for this gesture and assured that the line of credit will be utilised to fulfill the Ministry’s mandate of enhancing the delivery of primary health care.

A consultant will be hired to provide a detailed report of the project after which actually works will commence.