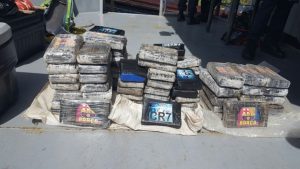 The cocaine that the Customs Anti-Narcotics Unit said was intercepted by the Guyana Defence Force’s Coast Guard.

The Guyana Defence Force (GDF) Coast Guard has intercepted a speedboat and two men who allegedly had  more than 95 kilogrammes of cocaine in their possession, the Customs Anti-Narcotics Unit (CANU) said Wednesday.

GDF sources told Demerara Waves Online News that the boat, which was fitted with two 350 horse power outboard motors sped off when they saw one of the Coast Guard’s metal shark vessels on patrol. A chase ensued and the vessel was intercepted about five miles at sea off the mouth of the Pomeroon River, sources said.

No shots were fired and no guns or ammunition were found aboard the vessel believed to have travelled from neighbouring Venezuela, the sources

CANU said its agents have have begun processing the vessel and its contents. and the two male occupants of the vessel remained in custody pending investigation.

No one has been charged yet.