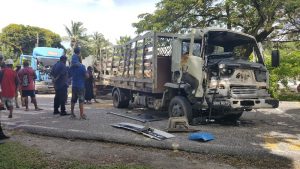 One person was critically hurt  and two cattle died Sunday afternoon when a paddy-laden long haul truck collided with a lorry that was taking the animals to the Georgetown abattoir.

The accident occurred at Main and Lamaha Streets.

The lorry- GNN 9079, registered to I. Hussain of Wellington Park, Corentyne, Berbice- was travelling west along Lamaha Street.

Eyewitnesses said the paddy truck slammed the front right side of the cattle truck. A porter, who was seated in the front seat of the lorry pitched through the windscreen and sustained serious head injury.

The paddy truck toppled on its side and several bags of paddy pitched out. 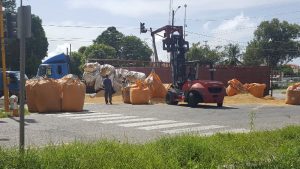 He was rushed to the Georgetown Public Hospital in a vehicle that was in the compound of the Prime Minister’s residence. The lorry driver, who was pinned, was removed by public spirited citizens and also taken to the hospital.

A forklift belonging to John Fernandes Limited later went to the scene and assisted workers in removing bags of paddy. The cattle were transferred to another truck and taken to the abattoir.