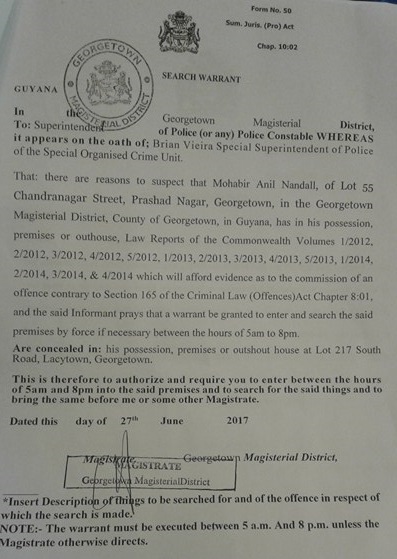 The search warrant that was granted by Chief Magistrate, Ann Mc Lennan at the request of the Special Organised Crime Unit

Even as former Attorney General, Anil Nandlall moves to quash a search warrant because he says there is an existing High Court order blocking the search of his premises for several publications, the Guyana Police Force on Monday said the new warrant is not for publications bearing a name different from that in the High Court order.

“The Force wishes to advise the Public that the publications being sought by the Guyana Police Force are fourteen (14) ‘Law Reports of the Commonwealth’ which were not the subject of the Conservatory Order issued by the Acting Chief Justice and which is the subject of criminal charges against the former Attorney General of Guyana,” states that law enforcement agency.

The Police Force said SOCU agents abandoned plans on Tuesday, June 27, 2017 to conduct simultaneous searches of residences controlled by Nandlall in an ongoing effort to recover the 14 Law Reports of the Commonwealth that were allegedly stolen before he left office in 2015. “These searches were abandoned after Mr. Nandalall was apprised of the pending searches,” the police force said.

Public Security Minister, Khemraj Ramjattan has already frowned on the reported reading of the search warrant in open court by Chief Magistrate, Ann Mc Lennan. He noted that there is an “element of surprise” that is associated with search warrants.

Nandlall last weekend said he would be moving to the High Court to quash the search warrant because the Conservatory Order already blocks the issuance of a warrant for the search of his premises and seizure of the law reports.

He has said that one of the places that had been named in the search is a house at Chandranagar Street, Prashad Nagar, Georgetown but he lives on Lama Avenue, Bel Air Park, Georgetown. His office at 217 South Road, Lacytown, Georgetown was named as the other place to be searched.

2017-07-03
Denis Chabrol
Previous: Symposium to focus on corruption in the oil industry
Next: Update: Bank robber shot dead; four guns recovered; shot bank employee was one of the robbers