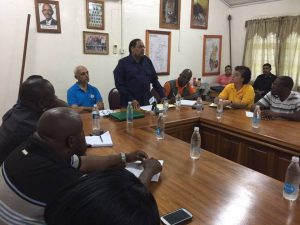 Prime Minister Moses Nagamootoo addressing a meeting in Region Nine where he was also briefed about the flood situation,

Guyana  will ask Brazil for information about the flow of rivers and also buy emergency supplies from that neighbouring country for flood-hit residents of the Rupununi, Prime Minister Moses Nagamootoo announced Monday.

“An approach would be made to the military attache of Brazil so that we can have the contact with the authorities there to find out what information they have as regards the flow of water,” he told a meeting of top officials of central government and the Region Nine administration during a visit there.

Nagamootoo said the Guyana government has decided to ask Brazil for logistical support and emergency supplies “that you may be able to have logistics better sourced from Brazil at this point in time than to have any logistics or supplies trucked from the city.”  Region Nine Chairman, Bryan Allicock is on record as saying that flood waters have destroyed cassava farms and cut off some southern Rupununi areas from Lethem, the major hub for  fuel and food supplies.

After concerns were raised about the likelihood of school children playing in the flood waters and contracting gastroenteritis, the Prime Minister announced that President David Granger has granted permission to “send the children on recess for the balance of the school term” “once you are satisfied that all the end of term requirements are completed and that children are not disadvantaged by this decision.” An advisory is to be dispatched to all schools for teachers to brief students about water-borne diseases and snake bites.

The Prime Minister also used the opportunity to sound an appeal for bipartisan political support in grappling with the flood that began several days ago due to heavy rainfall and overflowing Takatu, Rupununi and Ireng Rivers. “”In this process we need to have full cooperation among all parties. This is a matter in the interest of our citizens. This is not a political mater. This is not a party matter.

This is a time of possible disaster and we all have to come together and put aside whatever may be the side whatever maybe the side issues that distract use from time to time and be responsive as patriots to take care of all of our citizens who may face problems at this time,” he said.

The opposition People’s Progressive Party Civic (PPPC) controls the Region Nine Democratic Council having won 5,764 votes compared to 3,553 votes at the May, 2015 general and regional elections.

Region Nine Chairman, Bryan Allicock reported that the main road from Georgetown to Lethem is almost impassable and buses are now taking as much as 27 hours to complete a one-way trip. “We are looking at the main road to Georgetown where some bridges have gone…The big heavy trucks are still coming through so when those heavy trucks pass in the bad areas the buses are getting a difficult time. They have to rely on another lorry to pull them through so we need to look at that too because that is where we depend on our resupply from,” he said.

Allicock said a road to sections of southern Rupununi has been washed away and water from one of the rivers has been flooding the savanna. He said the area to Karasabai has been cut off for the past three weeks. Regional Council members are due to visit that village with assistance from the Guyana Defence Force (GDF) later this week.

He said a number of the villages is under eight feet of water.

Allicock said the Lethem Police Station would soon be flooded and would have to relocate its operations to another building that has been already identified.

In terms of food supplies, the Regional Chairman said they would have to purchased on credit “until we can get other  relief coming in.” He said the Toshaos (village chiefs) have been reporting that farms in many villages have been destroyed by the flood waters. “For the north; all the farmers called in – Fairview, Annai complete with the villages -Apoteri, Rewa, Crashwater, Aranaputa- all the farms are under water, some up to waist height. Some people are trying to salvage their cassava crops and they are trying their best to see how much they can salvage but it’s a bulk work in parching farine but after three days cassava is beyond salvage,” he said. Agriculture teams are to be deployed to collect data.

In that regard, the Prime Minister said teams of agriculture officials would be going out assess and collect data about damage and destruction to farms in case there is need for assistance with re-cultivation. “You need to have accurate data truthfully compiled about the extent of losses,” Nagamootoo said.

The Regional Chairman  said no one knows what is going on in southern Rupununi areas like Gunns Strip and Parabara because the High Frequency (HF) radios are not working.

An appeal has been also issued for more black tanks and chlorine tablets as usual water sources are under flood water and are unsafe for human consumption. “The water has covered most of the private wells that people use,” he said. A call was made for oral rehydration salts and antibiotics to deal with likely outbreaks of gastro and leptospirosis.

Deputy Head of the Civil Defence Commission, Major Kester Craig said there was no need to buy more pumps and tanks because there are 35 pumps and several black tanks that had been purchased for previous droughts and floods. The Guyana Water Incorporated (GWI), the Regional Chairman said, would be asked to transport water from identified sources and transport the tanks to the shelters and other affected residents.

2017-07-03
Denis Chabrol
Previous: Rupununi: Flood-hit residents to be evacuated; thousands others affected
Next: Symposium to focus on corruption in the oil industry