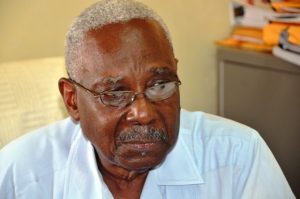 Long-serving General Secretary of the People’s National Congress Reform (PNCR), Oscar Clarke on Friday retired from that position, paving the way for the appointment of another veteran party member, Amna Ally to take over that chief executive officer position.

“The Leader of the People’s National Congress Reform (PNCR), His Excellency David Granger, has appointed Ms. Amna Ally MP to serve as General Secretary of the Party with effect from the 1st July 2017. Mr. Oscar Clarke, CCH, who served as the Party’s General Secretary through the tenures of three Party Leaders has retired with effect from today, 30th June 2017,” the party said in a statement.

The PNCR, which is the largest and most dominant party in the governing coalition, now also has three Principal Political Secretaries.

The Constitution of the PNCR, at Rule 14 (2) (c) states: The Party Leader may also appoint not more than three Principal Political Secretaries to whom he may assign specific duties.

In this regard, the Leader of the Party has appointed Ms. Dawn Hastings-Williams, MP, Ms. Sandra Adams, MS, and Mr. Brian Smith to serve as Principal Political Secretaries.

Oscar Eleazar Clarke, CCH, was appointed General Secretary of the PNCR on the 1st December 1968.  He started his service to the PNC in its youth arm and at age 26 was selected to represent the Party in the National Assembly. In 1965, he was made a Parliamentary Secretary and served as Deputy Speaker of the National Assembly from the 1st January 1969 to 31st December 1969. In a long and illustrious career that spanned over five decades, Oscar Clarke served his nation as Minister of State, Minster of Regional Development, Minster of Home Affairs and Guyana’s High Commissioner to Zambia and the Front-Line States and Ambassador to the Republic of Cuba.

Oscar Eleazar Clarke, CCH, served as a Member of Parliament for twenty-one years and in 2015 he was awarded the Cacique Crown of Honour for his exemplary public service to Guyana.

The Constitution of the People’s National Congress, at Rule 14 (2) (a), states: The Party Leader shall appoint the General Secretary from among the members of the Central Executive Committee as provided for under Rule 17 (1) (c).

The Constitution states, further, at Rule 14 (4): The General Secretary shall be the Chief Executive Officer in charge of the Party Secretariat and shall be responsible for its efficient organization and its day-to-day functioning.

Ms. Amna Ally, MP, is a long standing member of the People’s National Congress Reform. Like her predecessor Oscar Clarke, she came through the ranks of the Party’s youth arm and served as National Secretary and on the National Executive.

Amna Ally is an elected member of the Central Executive Committee (CEC) of the PNCR and before being appointed as General Secretary, she served as the Assistant General Secretary of the Party.

A trained teacher, Ms. Ally possesses a Teacher’s Certificate from the Cyril Potter College of Education and a Degree in Management from the University of Guyana.

Ms. Ally also served as a member of the Eighth, Ninth and Tenth Parliament, 2001-2015 and is currently serving as Chief Whip and Minister of Social Protection in the Eleventh Parliament.

Ms. Hastings-Williams, MP, is a member of the General Council of the PNCR representing the Cuyuni Mazaruni Region (Region No. 7). Ms. Hastings-Williams was selected by the PNCR to serve as a member of the National Assembly in February 2010. In 2011, she represented A Partnership for National Unity (APNU) in the Tenth Parliament and currently serves in the Eleventh Parliament as the Minister within the Ministry of Communities.

Ms. Sandra Adams is a member of the Central Executive Committee of the PNCR where she represents the National Congress of Women (NCW), the women’s arm of the Party. Ms. Adams is a former legislator and represented the PNC in the National Assembly for seven years (16th February 1998 – 2nd May 2006).

Mr. Brian Smith is the National Secretary of the Guyana Youth and Student Movement (GYSM), and is a representative of the Party’s youth arm on the Central Executive Committee. Brian Smith is a final year student at the University of Guyana reading for a Bachelor Degree in International Relations.

The Party Leader, His Excellency David Granger said; “taking into consideration the unfolding political situation in the country and the aspirations of the people, it is my opinion that, in this Diamond Jubilee Year, the restructuring of the General Secretariat would position the Party more advantageously to continue to serve the people of Guyana”. The Leader expressed the Party’s deep appreciation to Mr. Oscar Clarke, CCH, for his selfless, unstinting service as General Secretary through the tenures of three Party Leaders.

All of the appointments will take effect from the 1st July 2017.