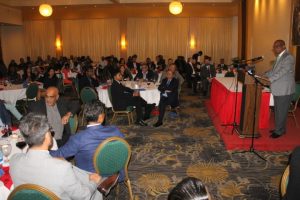 The Guyana government has suffered a serious shortfall in the collection of current taxes compared to last year, but the Revenue Authority has raked in more arrears in recent months, Finance Minister Winston Jordan said.

In a move aimed at rejecting concerns by the business community that their operational costs have spiked because of increased taxes on water and electricity, Jordan disclosed that the National Treasury has been losing out in the collection of Value Added Tax (VAT) on water because the Guyana Water Incorporated needs a new system to programme the inclusion of that tax.

Ahead of the release of Guyana’s half-year report in a few weeks from now, the Finance Minister said “contrary to the belief that we are raking in money,” up to May 31, 2017, VAT collection was GYD$1.8 billion less compared to 2016 and income tax was down by GYD$1.2 billion compared to last year.

“We are not raking in any money here. What we are raking in at the moment is arrears. Arrears have been up by 4.3 billion dollars. That is what has saved us so far; is the collection of arrears for some previously let us say non-compliant sectors so to speak,” said Jordan.

The Finance Minister urged Guyanese to stop the “romanticism” with certain things such as the sugar industry and  hydro-electricity as well as “anecdotes” such as the impact of taxation on the private sector.

Top Private Sector Commission and Guyana Manufacturing and Services Association (GMSA) executives welcomed the Finance Minister’s announcement that plans are in the pipeline to hold consultations thrice yearly with that association.

“In support of more effective dialogue with the GMSA, I am willing to take to Cabinet, a proposal for three joint round tables annually, on mutually agreed agendas, involving the a sub-group of key Ministers. I am proposing a sector-focused approach, possibly starting with forestry, since you have written to me already on issues affecting that sector,” he said in his address to the GMSA’s dinner.

He said that approach would support greater focus and enable them to measure our partnership through improved sector production, innovation and your own profits, as well as the targeted impact of those round-tables even as they collectively drill down to sector-specific diagnoses and solutions.