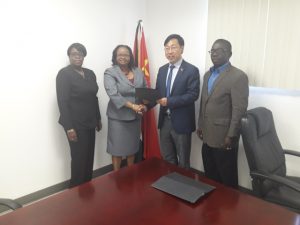 China on Tuesday donated at least GYD$20 million in medical equipment to Guyana to aid the fight against Zika and other infectious diseases.

The equipment will be used in the Reference Laboratory of the Georgetown Public Hospital Corporation (GPHC).
“I want to thank the Chinese Embassy and the people of China for the continued support in the medical field and look forward to other support for the Reference Laboratory”, Health Minister, Volda Lawrence was quoted in a Ministry of Public Health statement as saying following the signing ceremony at the GPHC.

“We are glad to do something in the public health sector for the Guyanese people,” Mr Shen Huiyong, Economic and Commercial Counsellor of the Chinese Embassy in Georgetown in response to Lawrence’s address.
The equipment included two centrifuges a PCR machine and laptop, to support testing for new and emerging infectious diseases here.

The instruments are accompanied by the appropriate testing supplies including reagents. The vector control services will be boosted with mosquito traps and knapsack manual sprayers to support prevention and control activities.
“The health of the people of Guyana are of utmost is importance to us at the Ministry of Public Health and our efforts are to continually improve the services that we can provide, GPHC said.

The team of Chinese specialist comprising Dr. Yanping Zhang, Dr. Yongjun Jiao, Dr. Zhifeng Li and Dr. Ye Tian, has been on a one-month stay here working with the Vector Control, Reference Laboratory and the Surveillance and Epidemiology Units “to support our prevention and control measures in response to the Zika virus,” a GPHC statement explained.

It said that the team also conducted training sessions with the hospital staff “across all of these areas and donated equipment and supplies to the laboratory and vector control services.”

Some areas of training included the use of MapInfo to show the distribution of disease cases and the density of the mosquito vector. Vector control staff were also coursed in calculating the Breteau Index “a measure of disease risk based on the density of the vector in a particular area, as well as identifying mosquito species throughout the life cycle stages.”

The laboratory staff were supported in testing of samples for the Zika virus.

The release said the specialised training will enhance the referral hospital’s control and prevention measures for Zika “but will also strengthen the health sector’s ability to respond to similar new and emerging diseases.”