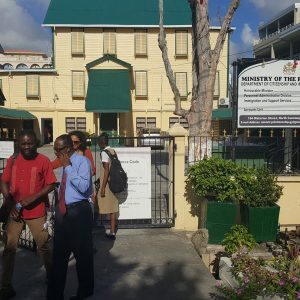 Fifteen Haitians, who travelled to Guyana several weeks ago in the hope of reaching French Guiana, have been released from police custody, prompting a call for donations to help make their stay comfortable, the women and children rights organisation, Red Thread , said Tuesday

“After a lot of work behind the scenes, those 15 persons are now out of the state’s accommodation and in possession of their travel documents once again,” Red Thread said in an update to participants at a recent Walter Rodney commemorative event held on June 13, 2017 when the status of the Haitians was raised.

Demerara Waves Online News was told that the 16 have been granted tourist visas, allowing them to remain in Guyana legally until September, 2017. Sources said during that period steps would be taken to find them sponsors to have them gainfully employed and granted work permits.

Red Thread’s appeal includes jobs and people to sponsor them. “The women can do hair, nails, makeup. The men include a mason, a welder, and two farmers.”

Earlier this month, Guyana sent back eight adults and six children to Haiti, saying that police had suspected that efforts had been made to smuggle them through Guyana to other destinations.

Red Thread issued a detailed appeal ranging from accommodation to food, furniture and farming tools. “Whatever you can offer would be welcome, be it help with settling in, rent (we are looking for rented accommodation); one-off/regular financial support.”

Donations can be dropped off at Red Thread, 72 Princes & Adelaide Streets, Charlestown, Georgetown.

Red Thread also called on Guyanese to assist the Haitians with casual wear clothing and work gear for the men as as well as footwear fir the women and children. The rights organisation also asked for school supplies and urged private primary schools to grant full scholarships to the seven children and the 16 year old  who may be able to pursue some computer courses.