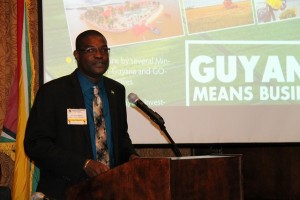 Guyana is finalising a study on how best to transport natural gas from the Liza oil field to shore and to use it to fuel electricity generation,  Minister of Public Infrastructure, David Patterson said Friday.

Patterson declined to discuss the cost of converting existing electricity generators to use natural gas instead of heavy fuel oil. “The study shows it’s very feasible, it’s very very affordable but when you mention money it distracts from the technical details,” he told Demerara Waves Online News. He said the desk-stop study would be completed in another few weeks and presented to Cabinet before it is made public.

Patterson, who is responsible for the energy sector, said the study would be completed in another few weeks, but preliminary indications are that it would be feasible for Guyana Power and Light to use natural gas instead of heavy fuel oil to generate electricity.

He said the new generators at Vreed-en-Hoop and Kingston power stations could be converted to use natural gas, “but obviously it is all a question of cost, affordability, delivery and those things.”

The use of natural gas for power generation, he said, could come on stream around 2020, the same time that Guyana is scheduled to begin commercial oil production.

American oil giant, ExxonMobil, has already ruled out commercial extraction of natural gas, saying that the volume is currently sufficient only to pump back into the well, and use some of the gas and water to sustain pressure during oil extraction.

Back in April, Minister of Natural Resources Raphael Trotman had told the House Natural Resources Committee that excess gas amounting to 50 million cubic feet per day could be used to power a 200 watt natural gas energy generation plant.

2017-06-23
Denis Chabrol
Previous: Granger rules out foreigner for GECOM Chairman
Next: “We have started down a very, very progressive path”- says National Toshaos Council Chairman on Lands Commission of Inquiry talks with President