Evaluators of multi-million dollar tenders to get more than GYD$3,000 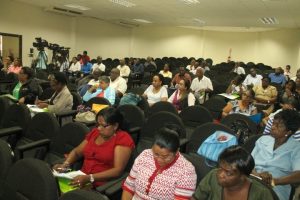 Potential evaluators at an orientation workshop held by the National Procurement and Tender Administration Board.

Evaluators of multi-million dollar bids are likely to be paid more than GYD$3,000 per bid, even as government moves to hire more such personnel, Chairman of the National Procurement and Tender Administration Board (NPTAB), Berkley Wickham said.

“I have spoken to the Minister (of Finance) about it and we are actively dealing with that,” he said. Wickham could not immediately say how much the payment would be increased by, but he said that should not be seen as a means of discouraging corruption.

“People can be influenced regardless of what they pay…The monies that are being paid, they are not paid to ascertain people’s honesty. It is just to defray any expenses they may have because the evaluators presently come from within the public sector and they are not being paid,” he said.

The NPTAB said government is relying on persons with integrity and are willing to do a good job that can withstand scrutiny. Wickham said background checks would be conducted on the potential evaluators.

He also told reporters that the newly-recruited evaluators are expected to receive further training. With most of the personnel being retirees, Wickham said they would be assigned to deal with bids in keeping with their areas of expertise. 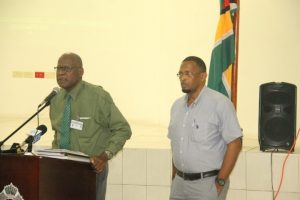 Chairman of the National Procurement and Tender Administration Board, Berkley Wickham and that entity’s Chief Executive Officer, Donald De Clou.

About 80 persons responded to a public call to participate in an orientation workshop for potential evaluators, but only about half turned up on the rain-affected day for the exercise that was held at the Guyana Police Force Officers’ Training Complex.

Thursday’s workshop focussed on a range of areas including the need for fair and equitable treatment of all suppliers and contractors including the importance of integrity and public confidence in the procurement process and achieving transparency in the procurement procedures. Wickham said the key principles that govern the process of evaluating tenders are non-discrimination, equal treatment, transparency and confidentiality.

Public procurement accounts for 20 to 30 percent of Gross Domestic Product “due to the act that we have a comparatively weak private sector and government has had to act a primary economic driver,” Wickham said.