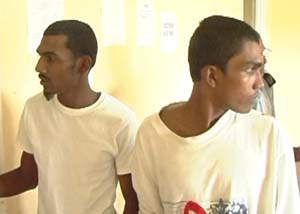 One murder accused was stabbed to death inside the New Amsterdam Prison , and his brother seriously injured, Director of Prisons Gladstone Samuels said.

Dead is Neshan Jagmohan. His brother, Ramnarine Jagmohan, was stabbed to his right  side and his condition is listed as serious.

“The two Jagmohan brothers had just returned from court. They were going to their living units when they were attacked by three persons who were in the prison,” Samuels told Demerara Waves Online News.

Samuels said the alleged perpetrators include two remanded and one convict.

He explained that because the suspects are already in prison orders would have to be requested to allow police to take them out in connection with this incident.

Neshan Jagmohan was on trial for the murder of businessman Devindra Deodat, on October 7, 2013 at Hampshire Squatting Area, Corentyne.

Deodat, the owner of Cool Runnings Trucking Service, was chopped and shot dead after a group of masked men stormed the grocery shop which he and his wife, Mala, 29, operated.

Neshan Jagmohan had once escaped from prison and recaptured in January, 2016.