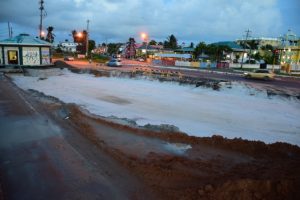 Repair works at the Kitty sinkhole.

The project to repair the sinkhole at the Georgetown-Kitty seawall has two phases, one of which is 85 per cent completed, according to Geoffrey Vaughn Permanent Secretary within the Ministry of Public Infrastructure.

Vaughn recently told Department of Public Information/Government Information Agency (DPI/GINA) that compaction tests are currently on-going. The compaction test is a laboratory method of determining the optimal moisture content of a soil type, and determining when it will become most dense and achieve its maximum dry density. Vaughn explained that the test will ensure that the backfilling which is taking place has the right compaction, once the compactions test meet the requirements, phase one will be completed. Drainage works are also on-going in the vicinity.

Phase two of this repair project consists of the section going towards Vlissengen Road and Carifesta Avenue, the Permanent Secretary noted that this should begin shortly.

Once both phases are completed, the area will be re-opened to vehicular traffic.

The repair project began in January 2017. Since then the Carifesta Avenue, Rupert Craig Highway and Vlissengen Road junction have been closed. Vehicular traffic along the Kitty Public Road has since been diverted to Queen Street and exits on David Street Kitty.

The sinkhole developed last December due to the failure of three pipes feeding the Kitty pump station. The pipe located at the seawall was corroded the most. A number of smaller holes then emerged nearby. Vaughn explained that proper drainage is foremost effective because in the past the areas were not drained properly due to the damage of the culverts.

A $127.1M contract was awarded to Colin Talbot Contracting Services for this project. The sum of $1.1B and $1.05B, respectively has been allocated