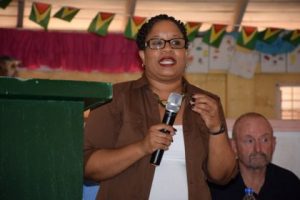 A female is set to be sworn in as the third Chairperson of Guyana’s Public Utilities Commission, following the retirement of Justice Prem Persaud from that post, government said Tuesday.

She is  Attorney-at-Law, Dela Britton.

Britton would be sworn in by President David  Granger on Wednesday at State House. “Ms. Britton intends to apply her broad repertoire of skills to the government’s bid to strengthen the effectiveness of the Public Utilities Commission which was established to regulate and monitor every public and private sector utility, ensuring that they operate at industry standards.,’ the Ministry of Public Telecommunications said in a statement.

Justice Persaud was at the helm of that regulatory authority up to March, 2017 bringing to an end an almost 20-year tenure.

Britton had herself been serving as a PUC Commissioner, and she brings to this public utilities regulatory body a wealth of legal experience in Guyana and the USA.

She had been admitted to the Guyana Bar in November 1995 after completing her Legal Education Certificate (LEC) at the Hugh Wooding Law School.  A few years later she enrolled in the Fordham University School of Law to pursue a Masters of Law (LLM) degree in International Trade Policy, Intellectual Property, Corporate Governance, International Law and more.

Over the past two decades, Ms. Britton authored and co-authored a number of Selected Papers and Publications while serving as a Managing Partner at the local law firm Britton, Hamilton and Adams.  She has been the Legal Counsel/Expert for an array of large and medium sized industrial business concerns, commercial banks and international organizations like CARICOM and the UNDP.  In addition, as a Consultant/Trainer with UNICEF she was integrally involved in several interventions concerning rights and conditions, health, education and general welfare for Guyana’s women and children.

The PUC was established in October 1990 under the Public Utilities Commission Act No. 26.   This piece of legislation was subsequently amended four times – in 1991, 1994, 1999 and 2016.  The commission consists of a Chairman who serves on a full-time basis, and three commissioners appointed to serve part-time