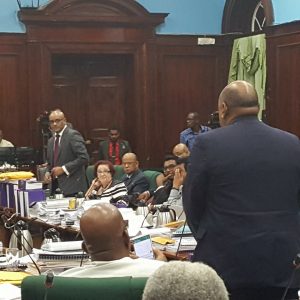 Opposition Leader, Bharrat Jagdeo (background) and Minister of Natural Resources, Raphael Trotman jostled each other to contribute to the debate on the Petroleum Commission of Guyana Bill.

Opposition Leader, Bharrat Jagdeo on Monday lashed back at Minister of Natural Resources, Raphael Trotman calling him “hostile” and “incompetent” despite efforts to cultivate a sophisticated image.

“I thought that this  revealed the true image of Trotman. Trotman has been trying carefully to cultivate an image of  efficiency, reasonableness, that he is sophisticated, suave, that he is above the fray. I believe he is slick, inefficient and one of the most hostile in the APNU+AFC coalition and this behaviour is the real Trotman,”Jagdeo told a news conference.

Jagdeo retaliated to Trotman characterising him as a “waste” and a “relic” who had presided over a government that had been riddled with allegations drug trafficking and wastage of millions of dollars on big projects such as the Skeldon Sugar Factory, Marriott Hotel and the Berbice Bridge. Trotman had said that government would rather be lectured on good governance by PPP parliamentarians Odinga Lumumba and Gail Texeira instead of Jagdeo who was president from 1999 to 2011.

The Opposition Leader flayed the Natural Resources Minister for failing to respond to several opposition criticisms of the Petroleum Commission of Guyana Bill last Thursday. “He knows of his own deficiency that he cannot respond without somebody writing a brief for him to those matters that we are going to raise in a debate because he is incapable of doing that so being incapable of responding to technical and economic analyses, what do you do? You descend into this fatuous antics that he displayed in the Parliament,”Jagdeo said.

That draft legislation has since been sent to a bipartisan select committee for further consideration before it is taken back to the full House for approval.

The former Guyanese leader said said, “I have never seen somebody’s face contorted with rage as displayed in Parliament. He was shaking uncontrollably because he felt incompetent exposed so he went after me in ad hominen attack.

The Opposition Leader said nothing would stop the governing coalition and supporters of calling him gay and corrupt. “They hate me for what I stand for,”he said.