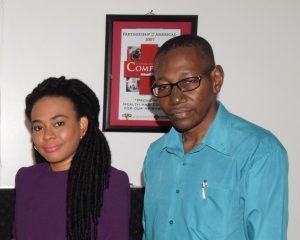 Chairman of the Board of Directors Kesaundra Alves and Allan Johnson.

Acting Chief Executive Officer (CEO) of the Georgetown Public Hospital Corporation (GPHC) Mr. Allan Johnson has been fired from the post and newly-appointed Deputy CEO, Retired Brigadier will take over from Friday.

in a statement issued through the Ministry of Public Health,

said Johnson was removed from the post with effect from Friday, June 9, 2017,

Alves said that the Board unanimously decided to remove Johnson following a series of lapses which included the embarrassment of the Corporation before the Public Accounts Committee (PAC) last month end.

In a letter to Johnson, Chairman Alves noted that “The incident before PAC has embarrassed the Board and staff of this Corporation and, to our dismay, has caused the public to question the desire of the Board for transparency and accountability in the handling of the Corporation’s money.”

The GPHC Board also “had cause to question your judgment on a number of occasions. Moreover, you continue to be absent or request early release from Board and Board Committee meetings… (and) are therefore consistently unavailable to supply the Board with pertinent information or to take instructions from the Board,” Alves said in the letter to Johnson. 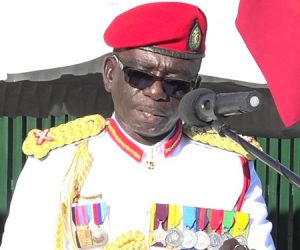 The letter said Johnson shall no longer act in the position “with effect from Friday, 9th June, 2017.”

The Ministry of Public Health seconded Johnson from the New Amsterdam Hospital in 2015 to Georgetown Public Hospital Corporation (GPHC) to act as its CEO.

The Board said it valued Johnson’s “time and efforts at GPHC” and wished him “the very best of health and success.”\