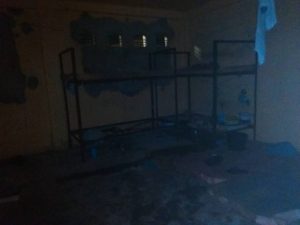 The bed where the fire was set by juveniles at their detention centre, Sophia.

Fire Chief, Marlon Gentle told Demerara Waves Online News that preliminary investigations have revealed that fire was set to a mattress in one of the rooms.

There was no damage to the building and no one was burnt. No one escaped from the facility that is the responsibility of the Guyana Police Force.

He said three male detainees were badly affected by smoke inhalation and were rushed to the hospital by the Guyana Fire Service’s Emergency Medical Service (EMS).

Heavily armed police were summoned at the scene to bring the situation under control. 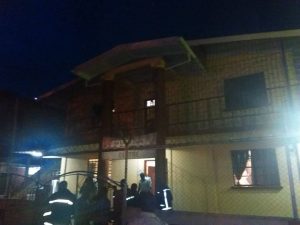 Police and fire fighters at the Juvenile Detention Centre where fire erupted Monday evening when detainees set fire to a mattress.

So far, police have not issued a statement on the incident.