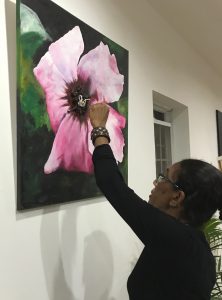 Vincentian artist, Josette Norris examines one of her pieces at the exhibition in Georgetown, Guyana.

Guyanese will have an opportunity to view the work of Vincentian multi-media artist, goldsmith and photographer Josette Norris at a one-week exhibition of paintings, conceptual art and jewelry to be mounted in Georgetown during the week of June 5-10, 2017.

The exhibition will be held at 160 Waterloo Street, North Cummingsburg, Georgetown a few doors from Lamaha Street.

It will feature a variety of artistic media, one of a kind costume jewelry fashioned from indigenous material, copper, silver, nickel silver, brass, semi-precious stones and objets trouvé.

“This is kind of a general exhibit. It’s not like a theme. It ranges from about ten years to last year, but I did that because I wanted people to get a broad-based view of my progression. My art has been changing and changing over the years,” she said.

Over the past few years Josette has been a frequent visitor to Guyana, where her daughter, Samara Murphy, lives with her husband Ronald Burch-Smith, and her grandson Grayson. The idea to stage an exhibition in Guyana came from her son-in-law and grew out of her appreciation for the country’s rich cultural heritage.

“Basically, Ronald invited me and I thought was a good idea. I didn’t think it would be such a dram thing to get stuff from St. Vincent,” she told Demerara Waves Online News. 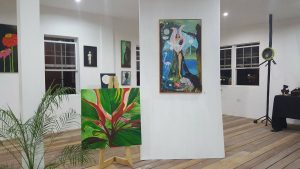 A section of the Josette Norris exhibition in Guyana.

Because of the fragile nature of her work Josette asks that visitors do not bring children under the age of 13. The exhibition is free and is open to the public from Monday 5th June to Saturday 10th June from 11AM to 6PM daily.

Visitors can look forward to an exciting and rewarding experience.

Featuring among the exhibits are tributes to Colin Garland (Jamaican/Australian artist) friend and former tutor of the exhibitor whilst she was at the Jamaica School of Art (JSA) and a portrait of world-renowned jazz musician and poet Vincentian Ellsworth “Shake” Keane.

Before studying between 1980 and 1984 at the JSA (now the Edna Manley School of Art) Josette served as a Crafts Officer/Designer at the St. Vincent Craftsman, a government agency responsible for the development, promotion and marketing of local craft.

At art school she majored in Goldsmithy, with subsidiaries in ceramics, sculpture, basic design, graphics and painting. She has a keen interest in documenting in watercolour old Vincentian houses and structures. These are available in print form in St. Vincent. 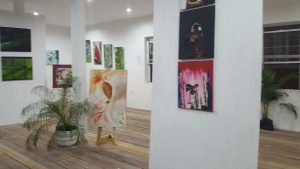 Some of her paintings, mainly in acrylic, adorn the walls of many businesses and homes in St. Vincent and the Grenadines, and others have been shown at exhibitions in Jamaica (1984), Trinidad and Tobago (1984), UNESCO Paris (1999), OAS Washington, D.C., (2004).

At home in SVG Josette has staged her own major multimedia exhibitions featuring photography, jewelry and watercolours in 1985 and 1997, along with minor shows of her jewelry, art and crafts in 2001 and 2002. She illustrated the cover for the 2nd edition (2003)  of Ruler in Hairouna, a classic novel on Caribbean politics, written by her friend, the late George C.H. Thomas.

Josette works from her studio at her home in Pembroke, St. Vincent painting and producing one of a kind jewelry and crafts under the trade name Bijoux Josette. She also makes and designs fashion jewelry for presentations staged by designer, Kimya Glasgow, her niece. Apart from her focus on painting and jewelry she also dabbles in ceramics and graphics in her spare time and is an avid photographer doing occasional weddings and other significant celebrations.

2017-06-04
Denis Chabrol
Previous: Body of businessman found in his yard with gunshot wound
Next: Submitting a third list of GECOM nominees almost impossible; much depends on Jagdeo- Granger meeting – Nandlall